Biggles? More like Giggles! as I took control of a real aeroplane courtesy of last year’s birthday pressy from  Ian and Mags – a 45 minute flight over the skies of Northamptonshire!

Ian & Ann, Ralph and Karen and my Ann were there to witness my performance as just after 11am, I ‘took the stick’ after some calm but expert tuition from my Instructor, Phil.

First impressions? Wow and more wow! I was warned that the take-off would be quite quick and the rate of ascent very steep – and Phil wasn’t wrong, as we were in the air, looking at the beautiful countryside of Northamptonshire within seconds rather than minutes.

Maybe more surprisingly, once we’d levelled-out, it actually felt very calm and tranquil high above the airfield as we slowly headed off towards Kettering and then onwards to Pitsford Reservoir. 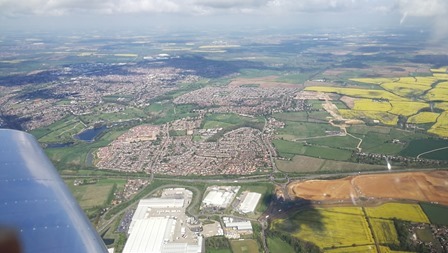 That’ll be Kettering ahead (apparently!)

I learned that rather grabbing the stick like my life depended on it, it was better to gently tweak it using just my finger and thumb – and it certainly worked, as the plane ascended, descended and banked with very little action from me in a rather graceful way. In fact, it all felt very unhurried, precise and just simply glorious taking in the whole of Northamptonshire – in less than an hour! For me, the most memorable part was when Phil demonstrated how the plane behaved if the engine stalled – BY TURNING OFF THE (SINGLE) PROPELLOR! My initial reaction was ‘Oh Dear’, as I could now see the single prop in all its detail, and it’s fair to say, l briefly, I had a ‘moment’. I shouldn’t have been worried though, as the laws of physics prevailed, and rather than a fateful plummet to earth, the plane continued on its trajectory – and for about 90 seconds we became a GLIDER! (and a perfectly manoeuvrable one at that! – Amazing!!!)

And then, in what seemed like an instant, my 45 minutes was up, and we headed back to base. Phil took the controls for landing (I had a feeling that I wouldn’t be expected to try and land the plane on my first lesson!) and we soon were shaking hands and saying our goodbyes. 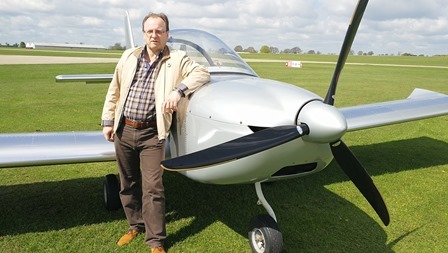 Fantastic! It had been an experience of a lifetime and I enjoyed every second of it – even the ‘glider moment’. Safe to say, I haven’t found a second career as a test-pilot – but if any of you get a chance to do this for yourself, I’d thoroughly recommend it! It’s like nothing else

We then headed back to ours where Ann had laid on a salad lunch followed by her Sunken (deliberately) Chocolate Soufflé with a Prune and Armagnac sauce. Ralph showed off the videos he’d taken of my inaugural flight and then we watched a bit of snooker on the TV before Ian and Ann said their goodbyes.

With the dishwasher on overtime, we four dug out the garden seat cushions from the garage and soaked-up a few rays before it came over a very grey. We finished the evening, watching my first 4K UHD movie: Sicario – an ultra tense political thriller set in Mexico – all washed down with a few G and Ts!

This was a good movie, with some especially ultra-tense moments in it – I don’t think I’ll ever look at queuing at the Dartford Tunnel in the same way again!

Ralph and Karen are staying over and heading home after breakfast tomorrow.

David and I decided to collaborate on cooking a meal for our respective other halves tonight – today being Valentine’s Day!

We kept it mostly a secret, having planned the nitty-gritty earlier in the week. The plan was to offer three courses plus a cheese-board, and then finish with a movie to round off the evening.

After a quick visit to Sainsbury’s in the week, we secured al the raw ingredients and on Saturday afternoon at 3pm, the hard work really started. We tried to strike the balance between complexity and variety – and take advantage of cooking from scratch, whilst using what kitchen equipment was on hand to speed-up the process.

So, it was round to David and Valerie’s for Starters and the Main

I think the plates said it all!

…and then back to ours for Dessert, Cheese Board and the chosen film for the evening. Well, although the Dessert and Cheese Board went down well, that’s more that I can say for our chosen film: Trance, on Blu-ray, starring James McAvoy, and directed by Danny Boyle. It started well – a heist at an Art Auction – but then rapidly turned into one of those films that demands 150% attention, no leaving the room or blinking (for fear of missing something important), and complete concentration! Having said that, the acting was very good, it’s just that my poor little brain just couldn’t keep up!

In spite of the disappointing film, it was a great evening, and the food went down well!!

Today, we welcomed Anne, Gerald, Ann & Richard and Alan to their first Class. Over the next 30-or-so Mondays, I’ll be guiding them through Windows 10 – and how to get the most from their Laptop. First job today is to begin to determine their priorities and then create their PLPs (Personal Lesson Plans). As […]

With the 30th (and final) lesson completed today – Jackie, Joe, Alan, Chris and Beryl took ‘centre stage’ and received their Certificates. We’ve covered over 75 hours of training and coaching with this group, and the small group size has allowed us to cover more topics in more depth. Congratulations Team! Now go and have […]

Today, in the penultimate lesson for the group, we continued to ‘mop-up’ loose ends, including:- Creating Address Labels Reviewing WhatsApp and Dropbox Moving Music to OneDrive