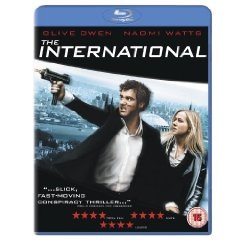 We watched The International tonight and it was excellent! It’s also the first DVD we’ve bought that features ‘BD-Live‘ (more about that later).

Starring Clive Owen and Naomi Watts, the story centres around a group of internationally corrupt bankers (very topical!)  and Clive Owen’s attempt to bring them down. Initially a bit of a slow-burner, the film soon got going and was very Bond-like and Bourne-like in its filming style. Some interesting twists-and-turns along the way certainly kept us on the edge of our seats – and perhaps, therefore, not for those that are of a nervous disposition! For me, the most stunning scene was the shoot-out filmed in the Guggenheim Museum – visually and aurally stunning. We wondered how they’d got permission to shoot (ahem!) there, only to learn from one of the extra features that they didn’t – they simply rebuilt it as a set.
The cinematography was excellent and looked stunning in Blu-Ray.

BD-Live
This is an extra feature built into some Blu-ray DVD players that does something quite clever: