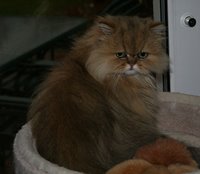 Whereas this time last year, we were saying that Biscuit is the more sociable-one, Bon-Bon is turning into a real ‘cutie’ and is becoming almost the same..

They still hate being bathed and now when we take them to the local beauty parlour for their six-weekly ‘service’, we tend to opt for just a serious brush and trim. To be honest, being cats, they keep

themselves very clean anyway, so maybe they don’t miss being bathed. All-in-all we’d say that their coats don’t seem to get knotted quite as much now, and at least they’re both a bit better at letting US brush them out. It’s still challenge though!!

They’re a little more tolerant when being picked up, but they still won’t settle in our arms for long periods of time – I guess some cats are like that…and they’re definitely NOT lap-cats. Having said that, they both love human company – any visitors seem to get the ‘hello, I’m going roll on my back for you’ treatment. They’ll happily investigate anyone who visits the house and they’re both pretty sociable with strangers.

Biscuit still tends to eat anything and everything, whilst Bon-Bon is a little more cautious. In terms of adventuring into the garden, the roles are reversed. The routine is that when I get up, I open the patio doors – Bon-Bon is always first out – sometimes followed by Biscuit, but sometimes not. She prefers to ‘lie-in’. If the weather isn’t warm, Biscuit is normally back in within a few minutes whilst Bon-Bon will happily stay out there whatever the weather. In fact, she seems to like the rain! – there has been a few occasions where she has been wet through just sitting out there, literally, soaking up the atmosphere. They both LOVE the pond water and it’s normally their first stop, happily avoiding the bowl of fresh stuff in the kitchen and the bowl just outside the patio doors! What is it about pond water?

They are still very comfortable in each other’s company. They don’t sleep together anymore – I think that was part of the kitten-phase, but at least they get on and don’t scrap (apart from the odd ‘chase’).

Playing and exploring in the garden is still a regular feature and in the last year, it’s become a lot easier to get them in. In fact, crouching down and calling Biscuit’s name is often all it takes for her to come running towards us. Bon-Bon still tends to treat it as a bit of a game, to see if she can hide and out-wit the humans!

They expect to be let out as soon as one of us is up in the morning. They will happily stay out there all day – even if it’s raining – and in most cases it’s a challenge to get them back in-doors. I think they both see it as a game when one of us attempts to herd them back indoors. They run for cover and hide. Having said that, both of them will (if the mood takes them) answer to their names and come running when they’re called. We think that’s pretty good considering they are CATS not dogs!

Biscuit is still occasionally jumping up on the fence – although she generally doesn’t go much further – she just sits on the fence sussing the scenery. There was just one occasion last year, where (we think) she got over the fence and out into the outside world. It was pouring with rain and I found her wandering about next door’s garden.

They are both still using the Tower for sleeping and as ‘home’. Our good friend Lee’s idea of putting it in the dining room, so they could see out into the garden was a master-stroke. Bon-Bon tends to use it most, taking over the top ‘bunk’. Biscuit is relegated to the second tier, but doesn’t seem to mind. At night, they both follow us up to bed. Biscuit is normally there first, up onto the bed and expecting a bit of a comb-out before settling down. Bon-Bon normally arrives later and settles down on the corner of the bed or on a chair. Having said earlier, that they’re not lap-cats, Biscuit does occasionally jump onto mine and snuggle down (for all of 30 seconds!)
Both still have this ritual of greeting us with meows and rolling on their back when we get in from work. Bon-Bon is now, I’d say, just as vocal as Biscuit, especially when they want to go into the garden. It’s a sort of l-o-n-g-e-r meow and very different from the normal ‘hello’.

Bon-Bon still has this habit of tapping plants with her paw – a sort of ‘handshake’ – and she’s now well-versed in offering her paw when we hold out our hand – we should have called her ‘Fido’!
Food-wise, it’s still one plate each of wet plus a bowl each of dry. They seem to like the variety although they’re pretty fussy with the wet stuff – it just has to be Gourmet Pearl Mini Fillets.