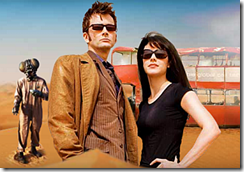 (Michelle Ryan as Lady de Souza )dropping from the ceiling on wires and stealing a precious jewel. This looked like a promising beginning. As she escaped, an iconic No. 200 red bus appeared and was boarded by the thief with the police in hot pursuit. Soon after, the Doctor got on board too using his psychic paper instead of an Oyster Card – nice!

For me however, the episode soon deteriorated into a predictable script-by-numbers episode with the bus disappearing into a worm-hole and ending-up on a far-away sand-ridden planet (Dubai in reality!) – the Doctor, Lady de Souza and the rest of the occupants were soon in peril from something alien, and by default, evil.

Back on Earth, my disappointment continued with the arrival of UNIT armed to the teeth, to investigate the bus disappearance. This really looked corny and very clichéd – to me, it seemed to be in the script simply to appeal to viewers from America and their love of macho demonstrations of aggressive force.

The CGI of the bus was pretty poor – the flying scenes looked totally fake as we’re all used to seeing a lot more convincing stuff from ‘The Mill’.

On the plus-side, full marks for the script writers for re-writing the script to accommodate the bus getting damaged in real life when it was unloaded in Dubai – it worked well. Competent acting by all concerned, especially Michelle Ryan, Lee Evans (as the crazy scientist, Malcolm, who for me, stole the show) and of course, David Tennant. They all seemed to be enjoying themselves and gave convincing performances throughout the episode.

So, all-in-all, a pretty disappointing episode for me – too light and jolly -too ‘U certificate’ and semi-serious. The best bit was one of the passengers warning the Doctor towards the end of the episode: ‘…he will knock four times…’ (or something like that). Maybe that’s a reference to The Master returning – spooky!!!

I respect Russell T Davies as a writer, he’s done wonders for the whole Doctor Who thing, and has brought enjoyment and respect from Whovians and casual viewers alike. But when I see episodes like this, I can’t wait for Steven Moffat to take the helm and give us a ‘darker’ ‘world of Who.

Update 13 April: General views on Digital Spy from others who saw the episode, confirm that the episode was one of the worst so far. That’s a real shame.

Next Episode: The Waters of Mars