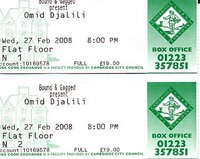 Wow! Woke up at 1am to the sound of the whole house shaking. Felt like an earth-tremor of some sort. When I got up later, BBC News 24 had reported an earthquake around Grimsby. A scary moment as we don’t get them that often!

Off to see Omid Djalili at Cambridge Corn Exchange tonight. We haven’t been to the Corn Exchange for many years and it’s changed a bit round that area – including a very large re-built John Lewis.
On arrival, there was a lengthy queue, but we had already pre-booked so we just had to pick-up the tickets across the road. The seating was cramped and the acoustics were pretty bad. The support act, a very talented singer-comedian (didn’t catch his name because of the acoustics!) did well as I think it was a surprise there was a support-act at all – no mention of it in the marketing materials.
Omid was great. I guess it’s a tough job being a stand-up, especially when it’s a University town and many of the audience are regulars. It’s also a tricky area pivotting your act around different cultures and how they are sometimes misinterpreted. A fine line between observation and insult 🙂
Anyway, Omid was on for around an hour and a quarter. He sang, danced and told jokes at frantic pace. Once again, some of the punch-lines were lost in the acoustic-fog! He was very original and in spite of a recent series on BBC1, I didn’t hear anything I had heard on the TV – excellent! He did really well, including the final part where he asked the audience to disclose things that are worrying them and he would ‘dance for them’. Challenging! Omid did well to manage the guy who disclosed that his wife had just left hime. I’m still not sure whether the guys was a plant, being honest or just pissed! Omid also managed the heckler from the Box above on his left, telling him to f*** off
We left around 10.15 and joined the queue for getting our car-park tickets stamped. Definitely a case of too many people and not enough machines. Ironically, it was then that we noticed that there was a sign on the machine to say we could have pre-paid for eveninng parking! Doh!!
It should have been a straightforward journey home, but we noticed sign in Cambridge saying the A14 was closed westbound. Initially we ignored them, but then we realised they were true and attempted to follow the sparse diversion signs. We visited the beautiful town of St Ives without meaning too along the way and got home around midnight!