Another small garden project today in the shape of lifting Denis’s Dahlias! Gosh, we don’t hang about, we left home pretty early and were on Denis’s doorstep by just after 10am! Bev arrived not long after which gave us all the perfect excuse for a coffee-break! 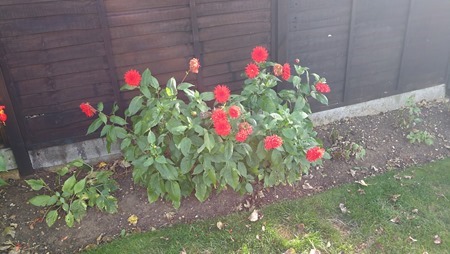 …and boy, has Denis got a lot of Dahlias! They’ve been in the family for generations, and with Denis now 88 years young, it’s all a bit too much for him to continue the ‘annual ritual’. Still, lucky he had the Palmer-express team on-hand – and an hour later, it was all done, and the Dahlia’s were ready for storing until Spring. 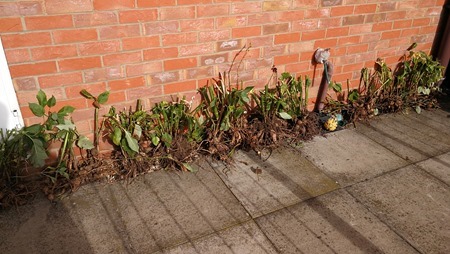 …and we even had time for Ann to plant a load of bulbs too!!

Bev was on hand to take care of lunch. By the time we finished our pottering about, we were ready for sustenance. Bev did us proud with a humungous Lamb Mince with Tomatoes and Pasta Bake, all topped off with Mozzarella and Parmesan. Unsurprisingly, it went down a treat! 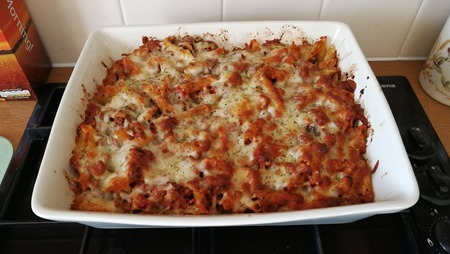 ..and there was probably enough left over to feed Denis for another month-or-so!

It was Christmas Pudding for afters, which we just managed to squeeze down, helped along with custard and double-cream! Yummy Yummy!

Whilst I was there, I decommissioned Denis’ PC (as he hasn’t used it for years) leaving the machine to chug away wiping the hard-disk. He also now internet-free and saving himself £15 a month! When we left around 1.45, the PC was still wiping-away, and Bev agreed to keep an eye on it.

Next stop was our local Tesco to stock-up with bits-and-bobs for our Curry Night with the Costellos on Saturday – tomorrow is going to be a BIG day of food preparation.

Blogging since 2004, about the significant people, places, sights and sounds of my world. Now dabbling with retirement!

Written by Steve Palmer Reading time: 1 min
Ann's car The Falcon and Fate!
1-to-1 coaching Tablet Coaching: Tweaking your Photos (Part 2)
0
%d bloggers like this:
Enable Notifications    Ok No thanks