We met up with Mick and Jane tonight at The Falcon Inn  at Fotheringhay. We haven’t been here for ages – back in 2008, and as it was probably our first serious pub-eatery back in our Peterborough days, we were interested to see how much it had changed.

Being Friday, the 13th, perhaps we should have stayed at home, as our perfectly ordered lives were about to play-out rather unexpectedly – Fate was to step-in later with a few surprises!!

The meal itself wasn’t too bad – ‘average’ rather than ‘outstanding’, but the service was very disorganised and lack-lustre. Still, on the positive side of things, the VERY long wait for our Starters and the (ahem!) ‘extended pause’ between courses gave us plenty of time to chat and catch-up with everyone’s news! 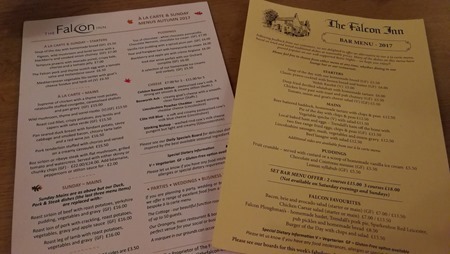 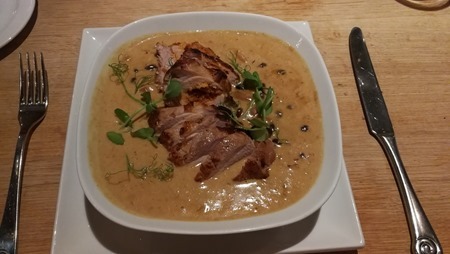 It’s what happened AFTER the meal that made us think we should have stayed indoors!

As we left the Pub reflecting on our disappointment, Fate presented itself in the shape of a (very unwelcome) ‘Road Ahead Closed’ sign. Trouble was, the road in question was the A605 back to the A14. ‘OK, no problem’ we thought, ‘We’ll double-back and take the back-road to Oundle’. We did (passing Mick and Jane in the opposite direction! who must have thought we’d left something back at the Pub), but after heading through Oundle town centre, our right turn back onto the A605 a few miles closer to the A14 was also met with a similar sign. There had been no warning on our journey there; in fact, the signage was pretty poor overall, and I’m sure other motorists were just as confused and frustrated as we were.

In my excitement to turn around and go for ‘Plan B’ (back in the opposite direction and pick-up the A427) I spun the car round and clipped the front offside wheel on the concrete island. Apart from the thump of it all, everything seemed fine – for about 100 metres – but then the dashboard reported a flat tyre!

Ahh, perfect! Just what we needed: an unlit road, late at night, and an opportunity to test my tyre-changing skills – and I wasn’t even dressed for it! I haven’t changed a tyre for years and the darkness made it, shall we say, ‘interesting’. Still, everything was where it should be – the jack, the brace… and even the locking wheel nuts! However, in spite of Ann’s Olympic-standard torch-bearing skills, progress was slow, and as a result, I don’t think any current F1 pit-crews need worry that their single-digit tyre-swapping times are threatened!!

Back on the road, it was a slow journey home, with our speed restricted due the ‘space-saver’ style tyre (maximum 80kph). In the meantime, the knock-on effect was that our trip to MK to meet Nicki  tomorrow was now in jeopardy as we going to need to get the tyre fixed. I think we eventually got home around 11.30 – much later than we planned!