Thanks to my good friend Stuart, today was an opportunity for me to wallow in the nostalgia of Film and TV from a bygone age.

It was my first visit to the annual Film Festival organised by Renown Pictures (better known to many TV viewers as the Sky 343/Freeview 81/FreeSat 306/Virgin 445 Film Channel Talking Pictures). 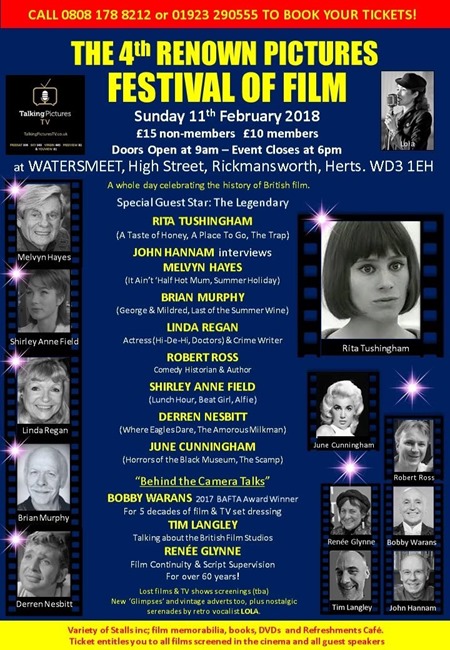 With the event starting at 10am, it was a relatively early start (on a Sunday) for me to get to the venue in Rickmansworth by kick-off. Being my first visit, I didn’t want to miss a thing!

Checking the website the day before revealed that all the tickets had sold out, so Stuart’s plan to buy them in advance certainly paid-off.

I arrived about 8.45 and being a Sunday, parking was relatively easy – I found a Pay & Display not more than 100 metres from Watersmeet, the venue, and it was free too! 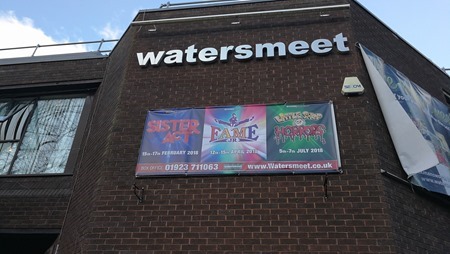 Stuart and Donald were already there – and so it seemed were most of Hertfordshire! It was already packed, and I got there a good 45 minutes before the start-time! (Note to self: learn the difference between ‘doors open’ and ‘start time’) Doh!

Inside, on the ground floor, there were plenty of stalls selling related items from DVDs, more DVDs, even more DVDs, Annuals, Film Posters and (somewhat tacky IMHO) Kenneth Williams Coffee Mugs (other Stars had also been ‘mugged’) – amongst gazillions of other related merchandise. 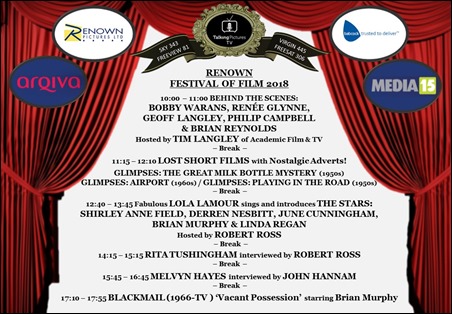 Upstairs was the Auditorium, already three-quarters full when we three sat down. We were all advised to move along the rows (to leave the ends empty) as ALL tickets had been sold.

Looking at the Programme, and being my first time, I wasn’t sure what to expect with the invited celebs. Would they be ‘past it’ bathing in former glory, or is the film-convention circuit a new-found calling? I’m happy to report that it was the latter, and as a result, the whole day was thoroughly entertaining. Although I didn’t stay right until the end, for me, two stars glowed the brightest: Derren Nesbitt, entertaining the audience with his witty banter (and fruity language) and Rita Tushingham, who at 75 years young, gave a thoroughly engaging, interesting and comprehensive account of her career to date.

Where the event was a bit disappointing (ironically) was the technical side of things. Lighting, Sound and Vision all had their individual wobbles during the event – and on at least one occasion, all three together! Having said that, am I going again next year? You bet? 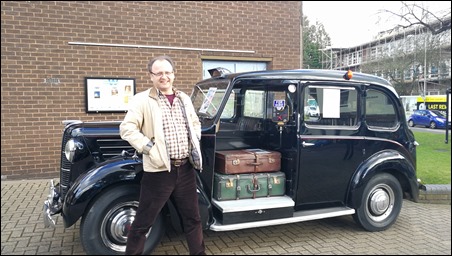 Yes, that is the Taxi from Carry On Cabby!