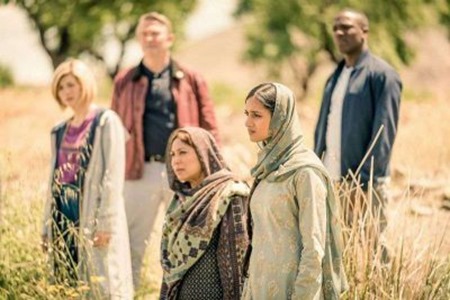 Oh dear! For me, this series is just going from bad to worse. Nothing wrong with the acting, it’s just the very simplistic scripts and the lack of any real tension, resulting in truly FORGETTABLE episodes. The Media too, are now starting to ask questions about the Programme and its overall tone.

Last week’s: The Tsuranga Conundrum was a case in point, where the ‘monster-of-the-week’ looked more cuddly than deadly!

Let’s hope this week’s yarn starts to pull things round. Here we go then…

7pm. The opening-credits have rolled, and we’re straight into the story – and it looks (and sounds) promising! There’s some tension already, with a proper time-travel mystery (the significance of Grandfather’s watch) to be solved, involving the time-travel ‘no-no’ of crossing your own timeline. Oh! and that briefest of glimpses of the monster-of-the-week suggests they’re a lot more scary than last week’s!

Just learned that the episode is set in 1947 specifically on The Radcliffe Line – at the time of the Indian Independence Act that resulted in the dissolution of the British Raj. The two self-governing countries of Pakistan and India legally came into existence at this time (for the Pedants: midnight on 14–15 August 1947). So, top marks for a story set during a significant historical milestone. A nice touch using the real Mountbatten Speech on the radio.

But what about the monsters?

22 minutes in – and our first real glimpse at this week’s threat! Yep, they’ll do! Nice and ‘other-worldly’! If you’re collecting names, these are The Vajarians. The music is good too!

24 minutes into it, and (oh dear!) here we go, the one-on-one, heart-to-heart bit (this time featuring Yaz and Graham) that seems to be a regular feature in this new-Who. Don’t care for these much – it’s not EastEnders!

Almost half-an-hour in, and we now get an even closer look at the monsters – proper scary (but great customers for SpecSavers!)

7.49: Some real tension here and probably not the ending you’re hoping for.

For me, the best episode of the series so far! Segun Akinola’s  music was spot-on (especially the part over the closing credits – beautiful!) and the acting as confident as ever. The writer was Vinay Patel and although the story had a similar feel to the episode: Rosa, it held its own with a good dollop of education and entertainment.