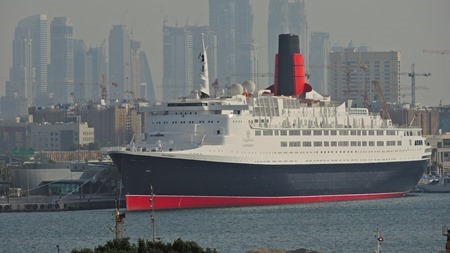 From a photography point of view, occasionally, an opportunity presents itself that’s truly ‘once in a lifetime’. We were offered one of those opportunities today! It’s Wednesday the 18th, we’re in Dubai and it’s our final day on the Cruise.

But first, “turn over your papers”, here’s a bit of ‘O Level’ Cruise history… (stick with it, it’s relevant!)

These days, there are now hundreds of Cruise Ships out there – as new Ships come along (which, these days, is fairly often), older ones are either sold off and given a new identity, scrapped, or if they’re lucky, given a new life as something else, somewhere else.

Cunard currently has (just) three Cruisers – ‘Elizabeth’, ‘Victoria’ and the one we’re on: Queen Mary 2’.  There’s a new one – as yet un-named – on the way, but that’s all a bit hush-hush at the mo’. Because there are fewer Cunard Ships, than many of their competitors, they tend to have a longer sea-life before the fateful decision is taken about their future.

If you’re a seasoned Cruiser (or even if you’re not), you’ll probably remember the ‘QE2’. Launched in 1969, it was then, the flagship of the Cunard fleet but was eventually ‘retired’ almost 40 years later in 2008 and sold to Dubai. Its future? to become a ‘floating resort’ (whatever that means).

So, in typically under-stated Cunard fashion, an announcement was made on-board a few days ago, that there were to be some free – yes, ‘free’ – transfers to the legendary QE2 in the Port of Dubai, on the very day it opens its doors to the public, as a brand-spanking-new glitzy floating hotel.

So here was the promised ‘once in  a lifetime’ opportunity – and we’re on the 3pm Tour.

The complete gallery of photos I took on the day are HERE.