Biscuit turned 13 today and by my calculation that makes her about 68 in human years. Our previous two Persians (Mumsy and Bubsy) made it to almost 15 and 14 years old respectively, but were both unwell in their final years. I therefore expect, going forward, we’ll be making more trips to and from the Vets! 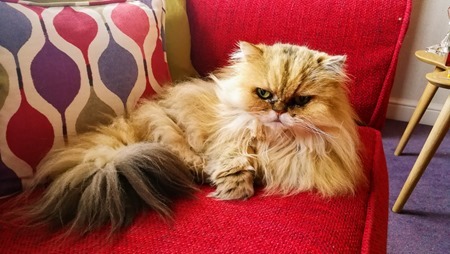 So, how’s Biscuit been since Bon-Bon passed-away on the 10th August last year? Well, in short, her behaviour has changed significantly. I guess being the only feline in the house now, it’s because she’s not got any competition!

For example, whereas she never used to sit with us on the sofa – now it’s a regular occurrence. Additionally, she’s now also a lot (lot) more vocal, especially when she wants something… anything… at any time! (sometimes even at 1.30am!) And it’s not a gentle meow either, it’s more of a full vocal work-out, exercising her lungs to capacity – in fact, she can hear me typing this and she’s started calling…

OK, back to the narrative – I think she just wanted to say ‘hello’ in her own special way!

Her eating habits have changed too. We tried Biscuit on tinned Tuna a while ago, and she adores it. When she scoffs, she does it at a ferocious speed and it would make any observer think it’s her final meal! She really does love the fish! Coincidentally, around the same time, she’s also become a bit indifferent towards the famous Dreamies – she must be the only cat we know who can resist them!!

She’s sleeping even more these days and hardly ever ventures upstairs when we’re going to bed (it used to be a regular occurrence) preferring to remain in the Lounge. Initially, we were a bit concerned, but then, just when you think you understand cats, in the past few days she’s now taken to sleeping upstairs when we retire for the night! Oh, and she’s now back on the Dreamies too!

Here is a few of her other habits…

Lap of Honour – She continues to be a lap cat when the mood takes her.

The Great Escape – A few years back, she was regularly jumping up on the fence to ‘go exploring’. Luckily, maybe because she can’t jump so high these days, these days, this never happens – thank goodness! However, she is still finding some way of getting out of the garden having done it three or four times this year. She’s always returned some four-to-six hours later, none the worst, except for a slight limp and a satisfied look on her face.

At Night – Biscuit is always in search of a hot-spot – whether it’s radiators, or the duvet (with the sun shining through the window on her) and more recently, during the snowy weather, right in front of the gas fire – sounds like a typical cat!

Cat Tower – It’s fair to say that she doesn’t use it as much as she used to, but every so often, she’s take the lower level and stay there all day.

Coats – Patsy, our nearby groomer, still sees her every six weeks, (every four, in the Winter), and is keeping on top of her coat. Although she closed down her Persian Rescue business last year, she still looks after Biscuit’s fur whenever we ask – it’s a great help, as Biscuit still doesn’t enjoy a bath nor extensive combing (whereas Bon-Bon enjoyed it all).

Cattery – The place we found nearby continues to impress, and she’s now been in-and-out quite a few times in the past year whilst we’ve taken long weekends and holidays. It’s pretty much perfect, as Gill, the owner, remains a cat-lover first, and a cattery-owner second! She also used to own a couple of Persians!

So, that’s it for 2018’s birthday girl – even without the company of her late Sister, she’s still a big part of our home, and gives us a lot of pleasure just watching her doing her ‘cat things’ (apart from the early-hours calling!)