Today, was the end of an era for me. The Hairdressers, that for over 30 years, has kept me well-groomed, has decided to close its doors – so today was the ‘final cut’.

And it was a good job I left early for my 9.30 appointment as when I got to the ‘main drag’ in Peterborough, it was grid-locked. After some ducking and diving, weaving and waving, I eventually got there, but it was close – at 9.10! 1 hour 40 minutes to get to Peterborough, and that’s an hour longer than usual (I’m not going to miss that part!)

My final trim meant I had a longer conversation with Shelley (who’s moving on to be a Teaching Assistant) whilst Nat and Clare, I learned, are scaling-down (but I only found that out today, and I’ve made alternative plans for the ‘barnet’ going forward).

So, at just after 9.45, it was all over, and an emotional farewell to Natalie, Clare and Shelley followed. They and their past colleagues have kept my collar visible (and witnessed the size of my forehead increase) since around 1987 equating, we estimate, around 300 cuts! I gave them a hug and handed over our Christmas Card, but I’d also got them a little gift each, to wish them well for the future – a lucky sixpence! 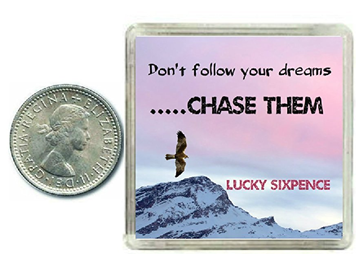 It was all much more emotional that I thought it would be!

(And a few weeks’ later, to make the day even more memorable, I received NOIP – Notice of Intended Prosecution – confirming I was caught exceeding the limit in Peterborough! 48 in a 40 is hardly ‘crime of the century’, but that’ll teach me to rush!) ☹️