That’s a record! Off to the local Odeon again tonight – that’s two visits in a row! 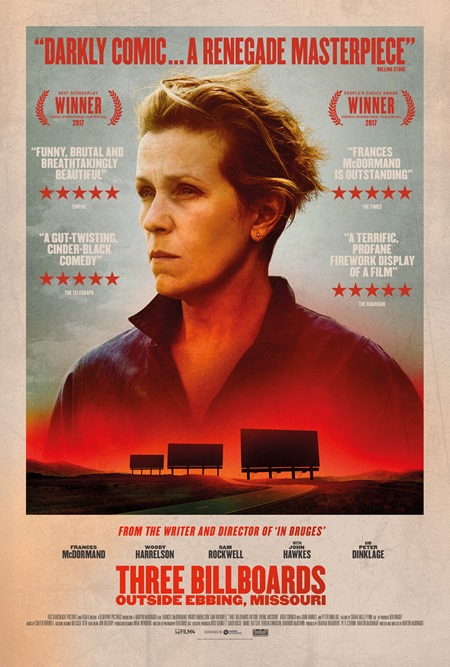 Tonight, we saw the award winning movie: Three Billboards outside Ebbing, Missouri. Ann had always wanted to see it, but we missed it first time round. For me, the motivation was more about a bucket-load of ‘40% off’ vouchers for Odeon – where the only caveat, was that they had to be used by the 15th March. Cue: a thorough look through the cinema listings!

The 6pm performance turned out to be a quiet one in terms of numbers – in fact the Billboards in the title almost outnumbered those of us watching!
But was it any good given all the awards it had won? Yes, very much so! It certainly kept our attention throughout, down purely to the acting ability from the leads. It was a refreshing change too, that it wasn’t dominated by special effects. Being more of Super-hero movie fan, I didn’t think this was going be ‘my thing’.
I’ve now revised ‘my things’!

Just go-see, and you won’t be disappointed! Another reason to see it, is that it’s apparently based on a true story.

SPOILER ALERT: Ignore the next few paragraphs, if you don’t want to know anything about the movie.

It doesn’t follow the normal structure of most movies, with lots of twists and turns along the way. Top top: try not to get too attached to the characters! Some aren’t around for long – and if there was an Award for the title-that-perfectly-sums-up-the-point-of-the-movie, this production would win hands-down.
Frances McDormand in the lead as Mildred, more-or-less carries the film and was certainly not a woman to mess with. ‘Feisty’ doesn’t begin to describe her!

Woody Harrelson as Willoughby, plays a sensitive but powerful role as the investigating police officer, whilst Sam Rockwell as Dixon turns out to be a loveable character in spite of his general incompetence.

Providing you’re OK with language with a ‘fruity factor’ that’s off the scale (including a liberal use of the ‘f word’, together with a more-than-expected sprinkling of the ‘c word’) you’ll enjoy it. It’s not billed as a comedy – the main thrust of the story-arc covers the most serious of family issues – but be prepared for humour that often errs towards a very darkest shade of black! Sometimes the laughs are obvious – almost slapstick – and sometimes they’re so subtle, they’d be easy to miss (Peter Dinklage for example, going to the ‘little boys room’).

Be warned though, with this film, it’s hard to predict what coming next. When it’s not tickling your funny-bone, some of the scenes of violence contain some a very serious amount of blood – it’s all acceptable in context, but it’s not for the squeamish.

The movie will take you on a roller-coaster of emotions and feelings, including plenty of sadness, despair, determination, optimism, revenge and many, many more!

It thoroughly exceeded my expectations and I’m pleased I saw it. I’ve docked it half-a-star only because given how entertaining it was, some potential audiences won’t see it (because Sky and others won’t be able to over-dub it that much without ruining the flow of the narrative!) /won’t want to see it because of the bad language.