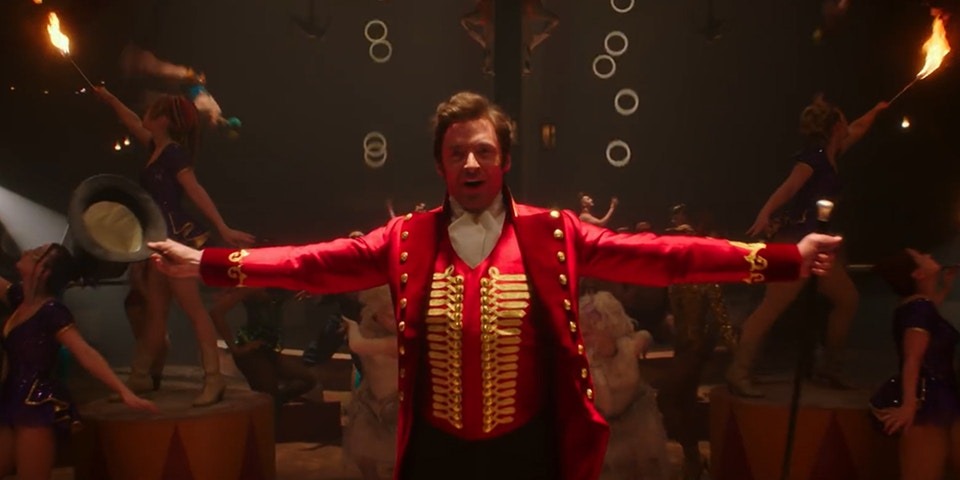 First up, we joined Jo, Janet and Carol at the local Odeon for the 3.15 performance of the movie: The Greatest Showman starring a clean-shaven Hugh Jackman (free from his Wolverine alter-ego). The movie is based on P. T. Barnum‘s creation of the the Barnum & Bailey Circus.

Initially, I wasn’t sure whether this film was going to work… Hugh Jackman singing..? and dancing? However, I’m happy to report that if you see this, prepare to have your heart melted! On a feel-good factor of 0 to 10, I’d give this one about 25! Fantastic, just fantastic! Don’t worry about the storyline, just sit back and think Moulin Rouge – with Elephants – combined with a poignant message for society about the tolerance of those who are different!

Hugh Jackman really pulled it off. He did sing, he did dance – and the whole cast gave it 110% throughout. All-in-all, a superb feel-good movie with a few tissue-moistening moments (just where you’d expect them) – perfect for New Year’s Eve!

In contrast to last year’s new year celebrations with Karen and Ralph, this year was a VERY local affair (about as local as it gets actually!) as it was simply next door to Paul and Karen’s! There were around 20 of us there in total and the Chefs amongst us had once again done us proud with some yummy food. Ann created some memorable Starters, Karen made a Thai Curry whilst Stella conjured up a chilli. The banquet was complete with a fruit platter courtesy of Rosi with Jo, Janet and Carol on Cheese duties. WOW! 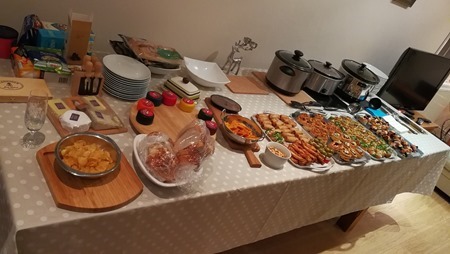 Cheese and a Fruit Platter to finish

The evening got off to an energetic start with a pop-quiz hosted by Kirk based on listening to opening bars familiar tunes. Most of us were rubbish. but Rosi excelled and more-or-less identified all of them!

Plenty of conversation followed and we were all in fine form throughout the evening.

Midnight came round quickly, and on the stroke of 12 midnight, Karen fired-up her TV and we watched the London Fireworks live followed by some Nile Rodgers and Chic on BBC 1 followed by the annual staple Jools Holland’s Annual Hootenanny with this year’s headline act – Ed Sheeran. Weirdest pop name on the show this evening probably went to Trombone Shorty who certainly knew how to get the most out of his instrument! Brilliant!
We all attempted Auld Lang Syne, but as enjoyable as it was, a certain lack of co-ordination on the hand-joining as well as the vocals meant that we should all probably stick to our day-jobs!

Not to be outdone, Paul and Kirk arranged a firework display in the garden. A brave effort, but it’s fair to say it felt underwhelming by comparison (but still a really good laugh!) 👍 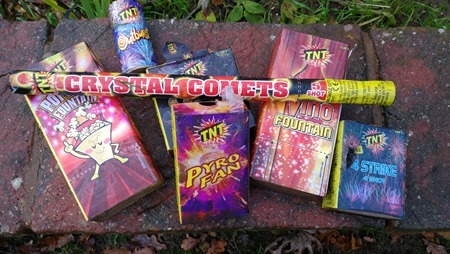 Towards the end of the evening (actually, I’m not sure there was an ‘end’ as such), just before 1am, Roger and Debbie J added to the party numbers, having been to Wicksteed for their new year’s eve meal whilst the rest of us were scoffing at Karen’s.

Jo, Janet & Carol wound things up around 1ish whilst we finally ‘threw in the towel’ at around 1.30am and that seemed to prompt some of the neighbours to do the same – Trish, John and then Rosi and David followed. It had been a GREAT evening – we haven’t laughed this much for ages – and for once, I felt I didn’t I’d overdone things on the alcohol front! We eventually hit the pillow at around 1.45am.