Well, I’m done for 2017, it’s 5am on the 8th (the day after this year’s campaign ended) where David, Paul (Marsh) and I have now survived this year’s challenge of living on a £1 a day each, for food and drink – for seven days .

Last year, the two of us (David and me) had 3p over from our initial investment, this year, the three of us did better – a whopping £1.21!!! 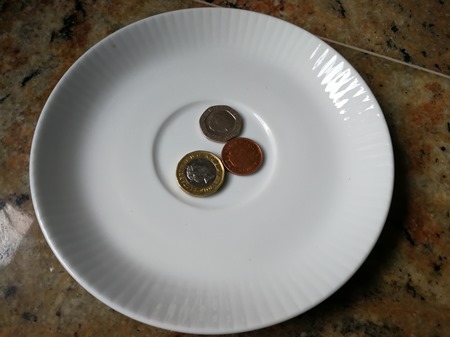 To make things a little more complex this year, I actually officially partnered with my good friend, Roy Clark, from Barnardo’s to help raise money for that Charity – although we ate in separate locations, we were in touch very regularly and both collaborated on the marketing.  Roy set a very ambitious target of £5000, and at the time, I didn’t think we’d get anywhere near it. To my surprise, our respective network of friends to the occasion and did their bit by donating generously and frequently. By the end of Day 7, Roy and I had raised a spectacular £2819.64… and no doubt more will trickle in over the next few days.

Roy and I decided to keep our JustGiving website open for another 14 days (until the 21st) to catch those who missed all the excitement first time round, due to holidays and other reasons.
https://www.justgiving.com/fundraising/steveandroyspoundaday

As many of you know, this has been my fourth year of ‘£1-a-day’ events, and once the initial hunger subsided, it actually felt a bit easier. In fact, with the benefit of three of us eating together, the economies of scale meant some of our meals actually looked (and tasted) ‘normal’.

Keeping a careful watch on portion-size, as in previous years, meant that we got the daily menus about right – and as you saw, we actually had some change left over too! We ran short of spread attempting to supply three of us with the same pack-size at last year, plus we had a fair bit of rice over – so it wasn’t a perfect shopping list, but it was close! Next year, we aim to buy some condensed soup (funds permitting) – ‘mushroom’ and/or ‘chicken’ to create some alternative sauces, this will give us more of a choice than just the tomato-based ones that was so popular this year.

As in previous years, we held back some money during the first major shop pending some visits to Morrison’s at 7pm – the traditional time for their daily reductions to kick-in. That worked in our favour and we were able to pick up a few bits and pieces in the week to relieve the boredom and repetition of some of the menus.

I used social media a lot more this year – Facebook (obviously), and Twitter, LinkedIn and Instagram too. This involved daily pictures of all the meals with some appropriate text. I’m 100% sure it helped, as just like last year, there was definitely a correlation with me posting and then donations following shortly afterwards.

Setting-up a donations page with JustGiving.com was a great move and it certainly beats knocking-on doors with a sponsorship form! Again, the text-giving option from JustGiving, was a damp squib – no-one used it except for when we were testing the feature!

Thanks again everyone – you’ve been super-generous. Next year, as usual, I’ll be supporting a different charity.