So, here we are at episode TWO of the new series – and after last week’s generally favourable views from the majority of critics, I wondered what this week’s story would bring?

I carefully avoided all the overnight reviews as I saved this episode to watch it on Sunday via Sky Q. Generally speaking Who stories based in the future don’t really do it for me, but I was fairly open-minded when the episode began…

We were soon in familiar territory by way of the banter between the Doctor and new companion Bill. I must admit, Bill is growing on me – I think I was determined NOT to like the youthful wisecracks, but they seem to nicely complement the Doctor’s more old-and-wise character. 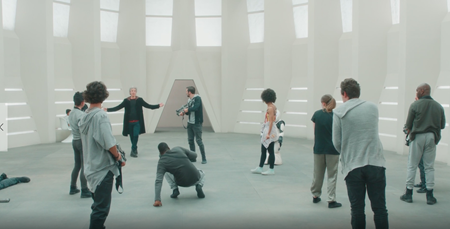 The title ‘Smile’ didn’t give away much before the episode started, but it soon became very clear of its significance as the episode progressed. Again, like last week, the episode was well-paced and the linear storyline made it much easier (for me at least) to understand!

So, all-in-all, another episode that kept me watching, but if I had just one minor criticism it would be this: I felt a bit short-changed when all the Doctor did to solve this week’s cliff-hanger was to… well, you’ll know if you’ve watched it, so I won’t spoil things for those that are still catching up!