It was over to Stratford-upon-Avon tonight to catch up with Ian, Ann McL, Mags and newly retired Alan!

Our restaurant of choice was El Greco’s in Rother Street. 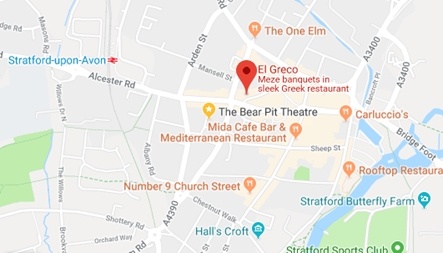 It’s a family-run affair and tonight was to be our first visit.

Our journey there was a bit sluggish in places but we’d allowed plenty of time – and as things turned out, good job too!

Getting there became an ‘interesting challenge’ for TWO reasons. Although we set off ahead of schedule, an error by me, somehow, in transferring the post-code to the car, sent us to wrong side of Stratford – and a residential area! Amazing what being ‘one digit out’ did to our journey.

It didn’t end there. Even with the correct postcode now confirmed, as we headed back in to central Stratford, there seemed be an awful lot of temporary road signs as we approached warning us of closed roads and restricted turns. After obeying the signs (there wasn’t much choice!) we ended up parking in a side-street not far from the Restaurant.

So, a short walk and we’d be there! Well, not quite! As we left the car, we could hear some deep bass of music in the distance! And as we turned the corner we were confronted by a… 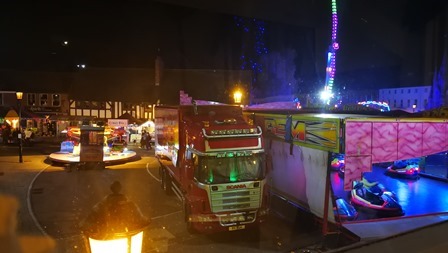 Initially confused (no change there then!) various signage indicated it was something to do with The Mop (a bit of history and context HERE). But tonight, as we learned later, was in fact a related event: The Runaway Mop (more information HERE). And if you’re wondering and can’t be asked to click on the previous links, yes, it does have something to do with mop-heads!

Anyway, the upshot of all of this was that the fun-fair obscured our destination, so even with Ian helpfully describing over the phone, where the Restaurant was and its surrounding landmarks, the size of the Fair combined with the noise made it a tricky exercise to comprehend and follow his simple instructions.

We eventually found the Restaurant – and all the hassle was worth it. It turned out to be a hidden gem. Classy decor, amazing food and great service. We arrived first, closely followed by Alan and Mags, and the Ian & Ann – the band was back together!

The meal for six of us including three courses and two bottles of wine came to just £60 per couple (and that included the tip).

We eventually left the Restaurant just before 9.30 and had the best journey home EVER. Gone was the congestion we’d seen on our journey in, and were were indoors in just under the hour!