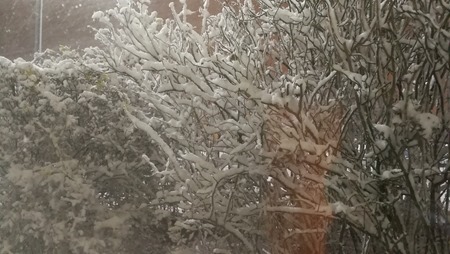 Today turned into a very long day. At one point, we weren’t even certain that we were going to make it at all to Seville to celebrate our anniversary later this week – and that’s no exaggeration!! In the afternoon, due to the poor weather and the lack of anything happening at the airport, we did think seriously think about calling the whole thing off!! For us not to travel is a serious business! Ooo err!!!

In spite of our smug-o-meter* registering 11, neither of us slept very well. Whether it was knowing that Mother Nature was going to unleash a generous dose of the white stuff overnight, or that our bed led a secret double life as a trampoline (bouncy or what), or that a couple of last night’s ‘Christmas party animals’ were staggering down our corridor in the early hours, announcing their presence, who knows? As a consequence, we were up sharp, just after 7am.

*The smugness came about after having taken the last-minute decision to book a room and head for Birmingham Airport the night before we flew because of the forecast of bad weather at home.

Once we were up, there were three priorities – a shower, a cuppa and then a careful peek through the curtains to see what the overnight weather had brought us!

True to forecast, the white stuff had arrived with some generosity. The view from our room revealed as far as the eye could see, a blanket of white… and it was still snowing!

There’s No Business (like Snow Business)
After watching a (thoroughly depressing) weather forecast on the TV, we quickly repacked our case and decided to get to the Airport even earlier than we had originally planned. Whilst Ann took care of checking-out, I headed for the car for the massive de-snowing exercise. Compared to when we arrived last night, the car-park now looked totally different. First off, it was almost deserted, and second, it was (obviously) covered in a thick layer of snow. There had been so much of it that in spite of there not being many vehicles left, they all looked the same! – Large fluffy indistinguishable white mounds!! At this point, it was simply a case of identifying which mound was ours! Not a great time then to forget where the car was parked!!

After a few mis-steps, I located the Sportage and fired-up the engine. Heated seats on – CHECK, heated steering wheel on – CHECK… and perhaps most important of all, a reminder to myself that with these appalling conditions – ALL WHEEL DRIVE! – it was probably one of our better option-buying decisions last year!

In all my years, I can’t recall so much snow in such a short space of time – 2-3 inches on the ground, more on the bonnet and even more on the roof – and it was still coming down! I’m not the sort of driver who simply scoops out a letter-box sized patch on the driver’s side and then drives off, so it was quite a while before the car resembled a Kia Sportage! Fifteen minutes later, with all windows thoroughly de-iced and roof and bonnet cleared of snow, we were ready for the short drive to the Airport.

Ready for Action (almost)
A cautious manoeuvre out of the car-park onto the main road revealed (once again) that when snow comes to the UK, driving conditions go from bad to chaotic! As we scrunched our way into the snow-packed tarmac, it became immediately obvious that the road had not seen a snow-plough nor gritter overnight! It was 8.30, there was plenty of traffic around, and we would have thought that this main feeder road to the Airport would have had a visit!

Not a bit of it! And as a result, the driving conditions were frightening. The Insignia in front of us, and the rather large white van in front of him were slipping and sliding all over the place. To make things interesting, there’s always a driver somewhere, who thinks he can ignore the conditions and drive like a knob. Today was no exception, and within minutes, in our mirror, a snow-heavy Seat with no lights on and a tiny slot on the driver’s-side windscreen for vision had re-discovered the previously un-used lane 2 and was ‘progressing with some urgency’ – how our slippy-slidey white van-man and he didn’t have a collision, I don’t know! There’s always one isn’t there???

All credit to the Sportage then, as it handled the conditions with ease – no sign at any point of the traction light coming on demonstrating perfect grip throughout our short one-mile journey to the Multi-Storey.

Birmingham Airport’s Finest Hour (Not!)
After a few circuits round the car-park, we found a slot and parked-up. Then it was simply the short walk to Departures. After negotiating the twisty-turney path through Duty-free (where the staff were strangely subdued), we attempted to find somewhere to sit. We quickly learned that this was going to be an enormous challenge as the whole area was packed because since 4am, nothing had landed and nothing had taken-off. As the minutes turned to hours, the Departures Board turned increasingly red, as flight after flight was cancelled. Communication from BHX was generally appalling and the pre-recorded ‘the runway is closed’ announcement, although accurate, was acting like Chinese water torture to us hapless passengers. In true Brit style, no-one moaned (well, not initially anyway) preferring instead to drain their phone batteries by posting regular messages on social media as to the increasingly deteriorating conditions (me included). 10am came and went, as did 11am, 12 noon, 1pm and 2pm. The shops were gradually closing, as one shift ended and their replacement staff clearly weren’t able to beat the weather. It was getting harder and harder to see how things were going to get better.

By 2.30, nothing had changed very much – the airport was still at a standstill. We’d only been there since 9am and we were beginning the feel the frustration. We were starting to think that maybe we should just call the whole thing off (but actually getting home, because of the snow, would be the next challenge). Imagine then how it felt for the couple next to us who had been there since 3.30am! By now, many passengers were finding that their phone batteries were getting low on juice – and drastic measures were needed. It was then that collectively, us phone users realised that this airport has no dedicated charging points (well, none that we could see anyway). Some passengers took extreme measures to juice their phones by unplugging abandoned island till displays to give their phones the kiss of life!!

This hadn’t been the Airport’s finest hour and by now, even the great British resolve was starting to crack.

Up, Up and Away (sort of)
And then, just after 2.30, without warning, they called the flight to Munich – the first flight out for ages! This was immediately followed by a loud cheer from the masses – albeit followed with sarcastic laughter!

One of the main problems with the chaos here was that there didn’t seem to be many staff around to talk to and query the latest situation We’ve not travelled with Jet2 before, but they were THE exception, as working in their favour was the fact they had a large staff presence around the Airport. It was now 2.45 in the afternoon and time for some assertion! A quick chat with one of their team and they revealed that our plane was actually there, the crew was there, and (at last) the runway was about to open – but, on the downside, we would probably have to queue behind the other cancelled flights, and there were dozens of those. The staff estimated another 4-6 hour wait! Not ideal, but at least we had a plan and a plane!

We headed back to our seats in the Lounge and after another 30 minutes of inaction, we made another enquiry. It was the best news of the day as were asked to make our way immediately to Gate 59 and get ready to board. Thus far ‘59’ had been the gate-to-date where passengers had been asked to go to when their flights were cancelled. For us though, our situation had changed completely. How come? Well, we’re not quite sure, but closer inspection of the Departures Board that whereas many planes were cancelled, ours was actually just delayed. Thirty-minutes later, we were sitting on our plane waiting for take-off!

In Dulce Jubilo (Nooooooo!)
At this time of year, I’m up for all those Christmas Hits as much as the next man and once we were seated, Jet2 proceeded to pipe their 2017 Christmas playlist through the cabin. All the staples were there – Slade, Nat King Cole, Mike Oldfield etc etc – lovely!. Very appropriate and very enjoyable at this time of year. Trouble was, 90 minutes later, we were still on the tarmac (the de-icing was taking an age!) and we’d now heard the same tunes nine times over. I’m a great Mike Oldfield fan, but if I never hear that song again, I won’t be disappointed!

And then, just before 5pm (only four hours later than planned), after a few false starts, we actually took off! At last!

Jet2 (Heroes of the Hour)
Our flight gave us an opportunity to experience Jet2 first hand. As previously mentioned, it was our first experience with them – and we weren’t disappointed. Totally professional throughout, courteous and happy-smiley. BA take note, this is how to do it!!! We’ll be using Jet2 again, I’m sure!!

Malaga (and the Flying Spaniard)
On landing, our decision to go with just ‘hand luggage’ paid off and we were also seated at the front of the plane. When the doors finally opened at just after 9pm, we were off that plane like a couple-of-passengers-who’d-spent-far-too-long-doing-nothing. We whisked through passport control and were soon in the Arrival’s Hall at Malaga Airport. Ann’s email to the taxi company had paid off and our driver was waiting. He didn’t speak a word of English, but it didn’t seem to matter as he sensed our urgency and drove like a bat out of hell Spaniard maintaining a steady 100-140 kph all the way to our home for the next few days:- the Hotel Inglaterra in Seville. 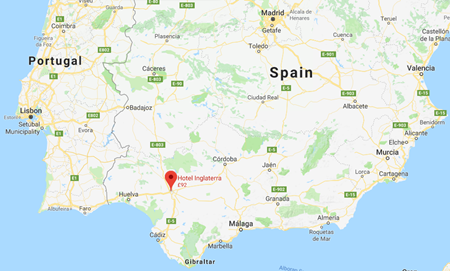 We arrived just after 11.15pm, totally exhausted. Through tired eyes though, we could see that the hotel looks like a good one. Within minutes we were in our room – room 308 – wrestling with the air-conditioning because it was too warm! How ironic! 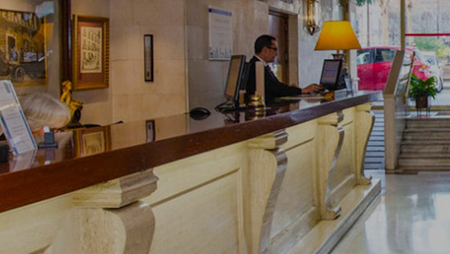 We’re here until Wednesday taking in some the sights of this part of Spain including Cordoba and Cadiz. Then it’s back to Malaga for a change of hotel before heading off to Granada. What makes this trip slightly different, is that we’re doing all by train!