It was off to the local Odeon today to catch the just-released Victoria and Abdul starring Judi Dench and Ali Fazal. In a way, it was a little like 1997’s Mrs Brown, also starring Judi Dench in the royal role, but this time it was set in the final years of her reign and charted her relationship with one Abdul Karin, during her Golden Jubilee . 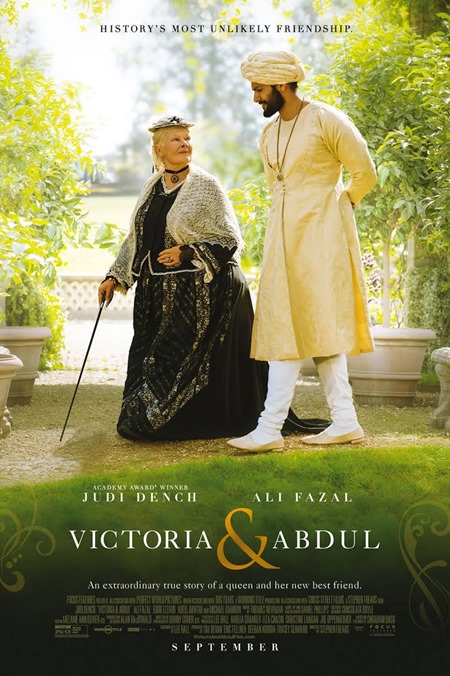 The nice thing about going to the cinema at 2.45pm on a Friday, is that it’s likely to be pretty quiet. In spite of that, even though our screen only had around a dozen people in it, two people managed to be sitting in our seats! What are the chances ehh?!

Back to the film – it started fairly light-heartedly, but as the story unfolded, it got progressively darker and certainly didn’t put those responsible for the Empire in a very good light. The main thrust was the blossoming relationship between the two leads, but it also exposed the darker side of the “establishment’s” view of India. Were we really so racist back then?! – deplorable compared to today’s supposedly more enlightened times! Frankly it made the “top-toffs” of the day to be pompous to the nth degree and unfeeling in the extreme. Horrible!!

A great cast made this film really watchable. Apart from the two leads, we had Tim Pigott-Smith, Michael Gambon and Eddie Izzard (turning in a very convincing – and somewhat creepy ‘Bertie’ – the future Edward VIIth) amongst many other British thespian-staples. Yes, you will need some tissues for the final scene, but overall, in spite of the anti-Indian atmos, it was a really good “feel-good” movie.