WARNING! Please read responsibly. This Blog contains large amounts of smugness!
So, that’s my ‘Lent event’ over for 2017. What began in 2010 as a small challenge, has now grown into a much bigger test of will-power!

Some of you have asked how I got on, so here’s a short summary. Thanks to all my friends and family – and especially Ann – who helped me out during the period with modified menus and words of encouragement.

I began the challenge on the first day of Lent this year – 1st March – and finished at midnight on Thursday, 13th April (yesterday). Technically, I know, for some, that’s not the complete period of Lent, but it works for me! I also didn’t take Sundays off, and many have commented that Lent allows this …but where’s the fun in that?

This year, there were 46 items to try and steer clear of – nothing special about the list except they are all my favourites! For 2017, I added ‘Coffee’, ‘Gin & Tonic’, ‘Lemonade’ and ‘Stilton Cheese’. In truth, after this many years doing it, I’m slowly running out of things to add!!

So, all-in-all, I’ve lost a bit of weight, but it’s the ‘will-power’ thing that’s the real test. As in previous years, the toughest time was at the beginning, where I certainly had more-than-one attack of the ‘munchies’ around the lunchtime period. Things got better as the days went on though! The smug-o-meter was on the rise!!!

Out of everything on the list, I think I missed Curry and Chocolate the most!

As has been the ‘tradition’ since I started doing this, I always try and add a few items each year to make things a bit more challenging for next period of Lent, and that’ll be no different for 2018 it’ll total 48. I’m adding two more – Salad Cream and Semi-skimmed milk (the latter isn’t exactly ‘a favourite’, but it’ll still mean an extra challenge for breakfast cereals and my tea!) 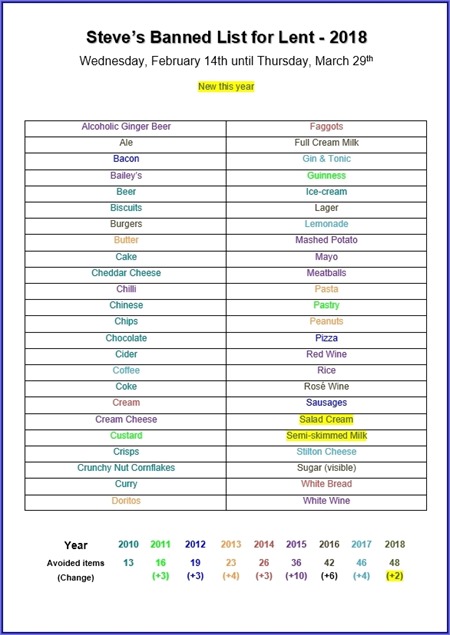