Surely there cant be any more impossible missions for the IMF to sort out, but it hasn’t stopped Tom Cruise squeezing more out of the franchise! 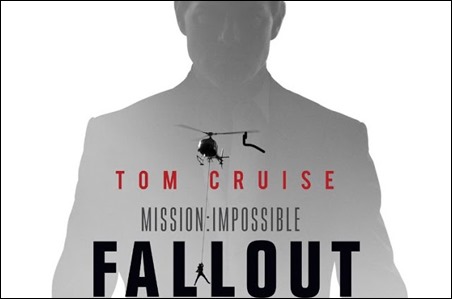 So here we are at M:I-6 aka Mission: Impossible – Fallout and the synopsis (should you wish to accept it) is below…

“Ethan Hunt and the IMF team join forces with CIA assassin August Walker to prevent a disaster of epic proportions. Arms dealer John Lark and a group of terrorists known as the Apostles plan to use three plutonium cores for a simultaneous nuclear attack on the Vatican, Jerusalem and Mecca, Saudi Arabia. When the weapons go missing, Ethan and his crew find themselves in a desperate race against time to prevent them from falling into the wrong hands”.

Not content with metaphorically breaking a leg in previous MI productions, this time, he broke something else (literally) – an ankle – doing the majority of the stunts himself! OUCH! Still, as they say: there’s no such thing as bad advertising!

So, it was off to Kettering Odeon  with Jo and Janet for the 2pm performance. Excerpts (mostly focusing on the stunts rather than the storyline) had been nothing short of breath-taking.

Well, what was it like then? In short, action, action and err, more action, from start to finish  (with just a few short breaks to allow the audience to get their breath and to advance the storyline). In the pre-credits opening scene, it was typical old-school MI where fans of the original series will probably see the outcome a mile off, but it was a nice touch. Netflix addicts will have spotted a face they’ve seen before, playing a major part in the plot as well as someone that other cinema fave – The Greatest Showman.

Wow! It used to be that the Bond movies had the edge on stunts – but no longer! Car, bikes, vans, London skylines – and even helicopters – were used and abused in pursuit of this adrenalin-fuelled actioner.

Don’t worry about the plot too much, just sit back and monitor your pulse throughout the 2 hours 28 minutes! Given the level of continuous action, the time pass in a flash!!

And for the more cerebral of you, if you like storylines to involve double-crossing and triple-crossing, be prepared to ‘up your game’ for this one! Whilst you’re at it, play ‘catch-phrase Bingo’ and see how many times you hear the phrase :“I’m working on it”.

One final point that caught my eye: look out for a major ‘reality error’ involving the London scene and the white van. Answers on a postcard please!

Phew! I think we were all exhausted when the credits rolled!