No… not a scene from When Harry met Sally but a reference to a couple of prog-rock elders (that’s Ian and me!) and our trip to see the supergroup, Yes, at the Royal Albert Hall tonight where they concluded the UK leg of their 2016 Spring Tour.

We started the afternoon with something  much quieter – a visit to the National Portrait Gallery. I can’t recall the last time I visited, but it’s got to be well over 15 years ago.

A return to the NPG

After our cultural afternoon, it was a short walk to nearby Prezzo’s for a bite before grabbling the Tube and heading for the venue.

The venue wasn’t a sell-out – but nearly – where the enthusiastic support by the fans more than made up for any (slight) lack of numbers.

The evening started on time with the Swedish support Band: Moon Safari performing three of their own compositions. They gave us a very big sound and to me, they sounded like a cross between an early-Yes and Queen. They certainly gave it their all, and the assembled masses took to them immediately, especially their final number where they ‘acapella-ed’ their own short piece as a tribute to the ex-Yes band member Chris Squire.

Moon Safari (proving that not every singing group from Sweden sounds like Abba!)

Talking of Band Members, YES, like many others of this vintage, are showing a very different line-up these days. I wouldn’t say I was a super-fan, so I don’t follow them daily and I immediately spotted that there had been some major changes. Steve Howe – in his 69th year – is still there, showing us all how to squeeze every last rift from his range of guitars. Alan White was ever-present on drums whilst lead vocalist, Jon Davison worked his lungs off with Geoff Downes  looking after the nine (yes NINE, count ‘em!) keyboards and Billy Sherwood completing the lineup on backing vocals – but in 2016 there’s no Jon Anderson nor Rick Wakeman. What was a (very welcome) surprise though, was the  guest appearance from the former band member Trevor Horn who sang like his life depended on it – and where the audience responded in kind with a standing ovation.

Yes’s playlist was massive! They performed two of their iconic albums, Fragile (1971) and, for the first time ever, Drama (1980) both in their entirety, in addition to dozens of their classic tracks including my fave: ‘Owner of a Lonely Heart’. 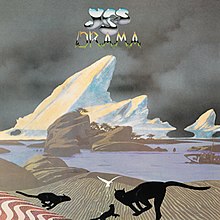 They were still rocking the aisles when Ian and I left at 10.15 to get our train connection. All-in-all they would have been on stage for a crowd-pleasing two-hours plus (and no doubt a encore-or-three).

It was a fantastic evening and a a great day with fellow prog-rocker, Ian – my cultural brain has been fed and watered and my ears are ringing, so that’s a good sign!

We shared a cab and I arrived at St Pancras just before 11. The train was on time but clearly it clearly got bored by the time we arrived at Bedford as it slumbered into Kettering a full fifteen minutes late – at just after midnight-thirty. Having taught my computer-class in the morning, my day was now catching-up with me and I was glad that the roads were deserted (one of the benefits of travelling at that time!) and I could get home in record time!

Yes might now be heading for their next gig in Paris, but I needed my bed!