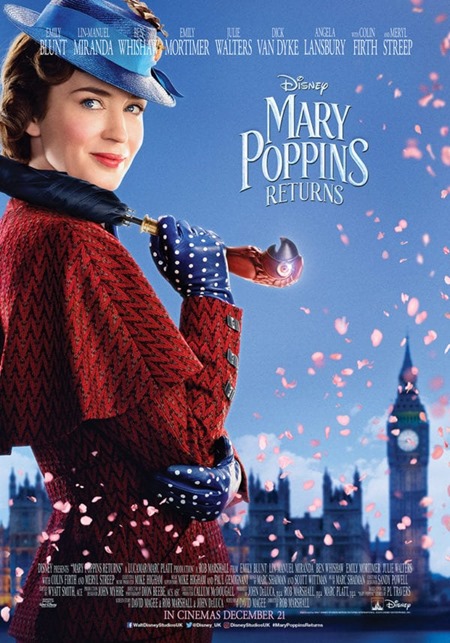 It was off to the local Odeon tonight with Jo and Janet to see the film: Mary Poppins Returns. The cinema was optimistic of plenty of punters like us showing-up  with performances every 30 minutes.

It’s always a bit of a gamble with ANY sequel, but one as iconic as 1964’s Mary Poppins – could it possibly deliver?

Well, I’m pleased to say it did! With standout performances from all the stars – Emily Blunt as the eponymous character, with Lin-Manuel Miranda, Ben Whishaw, Emily Mortimer, Julie Walters, Colin Firth and Meryl Streep, it was definitely a film from the they-don’t-make-them-like-that-anymore school of cinema (except of course, they just had!)

With an easy-to-follow storyline, where everyone looked like they were having fun, it featured the two essentials of any blockbuster sequel – dancing penguins and Colin Firth. And, if that wasn’t enough, the surprise appearance (providing you don’t read the Poster above too closely) towards the end of two much-loved Hollywood greats (combined ages – 186!) completed the feel-good factor.

Standout moments? The lamp-lighters’ song-and-dance routine and overall the integration of live and cartoon scenes.

Any disappointments? hhhhmmm… the first few scenes dragged a bit and for me, and it didn’t really get into its stride until the talking animals appeared (obviously!) The songs were good, but none of them left me humming them on the way out, the way they did when we saw The Greatest Showman almost a year ago. Meryl Streep’s character was a bit weird and didn’t add much to the narrative. And just to be really pedantic, I think I heard an Americanism in one of Mary’s ‘English’ songs (but I’ll have to wait for Sky to show it, to find out). Oh, and it all felt about 25 minutes too long – I can’t see many kids sticking with it!

Having said all that, it was a perfect film for this time of year. In a word…