Skip to content
Reading time: 2 minutes...One of us slept well, the other is Mr Grumpy (because they didn’t!) It was either the time-zone change, the Kevlar-coated mattress, or a mixture of both! Back to the itinerary! Today, it’s Singapore Zoo for us – luckily, as visitors!! We haven’t been here since our first visit to Singapore, 32 years ago! and it’ll be interesting to see how much it’s changed. 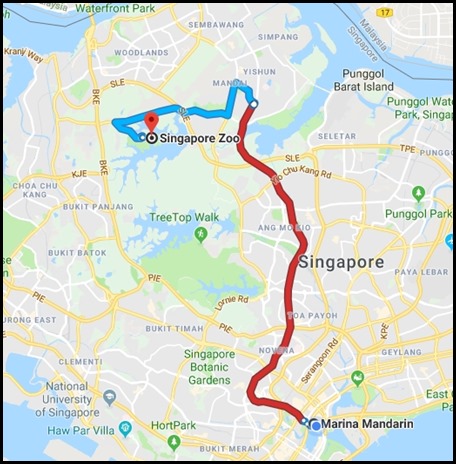 But first we needed to work out how to get there. The easy option would have been to grab a cab, but where’s the fun it that? Instead, we opted to do it all by Singapore’s public transport system – the bus and the MRT (Metro). With some initial help from Google Maps (that now helpfully shows public transport connections as well as the better known car travel options) we had it sorted in no time! The journey turned out to be pretty straightforward: From Esplanade MRT Station (just a few minutes walk from our Hotel)… then change at Dhobi Ghaut… get off at Ang Mo Kio… take the short walk downstairs to the Bus Interchange to catch the 138 Bus – cheap as chips at S$2.20 (£1.20) each – and we were there, literally, as the Bus dropped us right outside the Zoo. 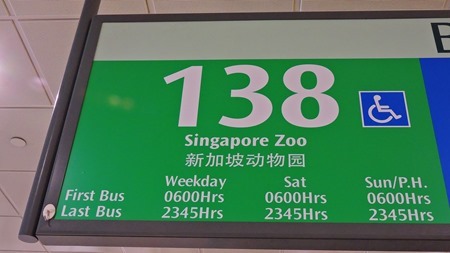 Lemon Squeezy! So, in just over an hour, we now had our Zoo tickets in hand – S$70 (£38) in total for both of us – and we were now getting re-acquainted with the animals! 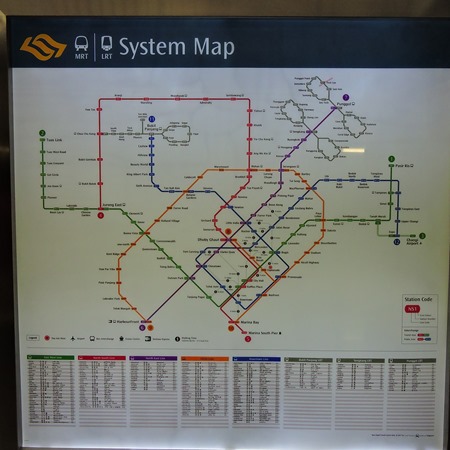 Wow!The Metro has grown quite a bit since we last travelled on it It wasn’t the best of weather, but still pretty humid, so we took it easy, as this is a very large Zoo! In fact, it’s now much larger than we remember it back in the early 90s – it seems to have grown in every direction, plus they’ve somehow shoe-horned in a reservoir too! Amazing! 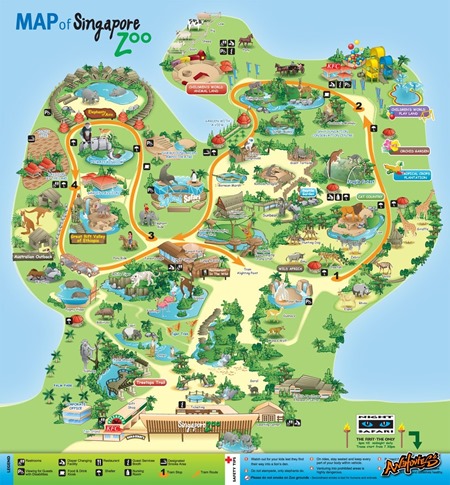 So, it’s with some disappointment that we came away slightly underwhelmed. I don’t know whether it was the time of year, or maybe the weather, but there seem to be a distinct lack of animals, and we had to look quite hard before we spotted anything! Even the famous Polar Bear area was closed for refurbishment and there were so few Meerkats, we couldn’t even compare them! 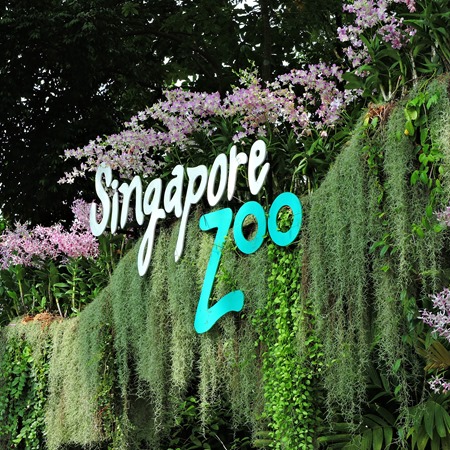 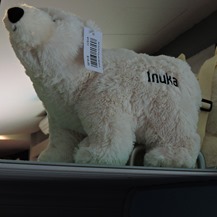 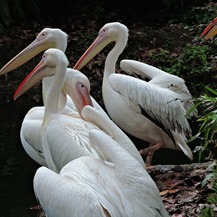 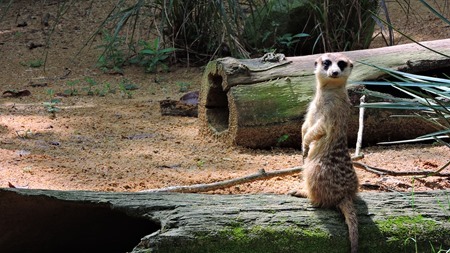 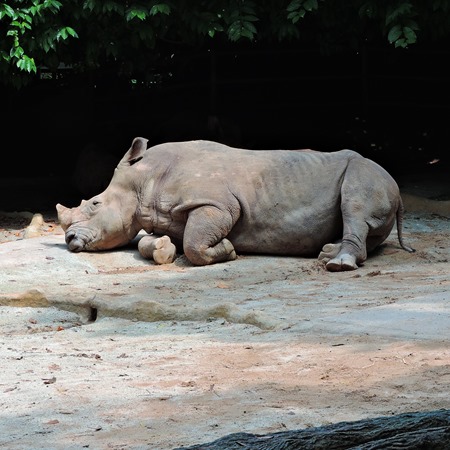 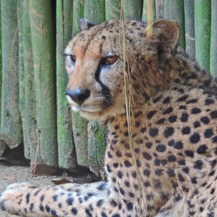 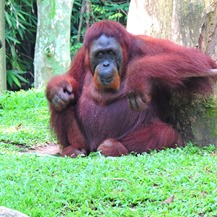 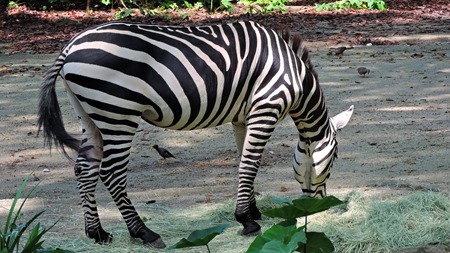 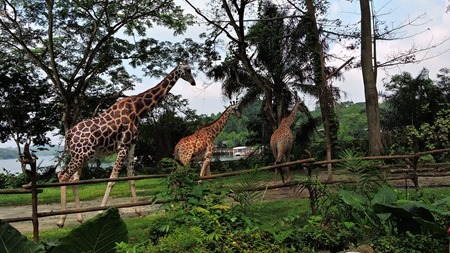 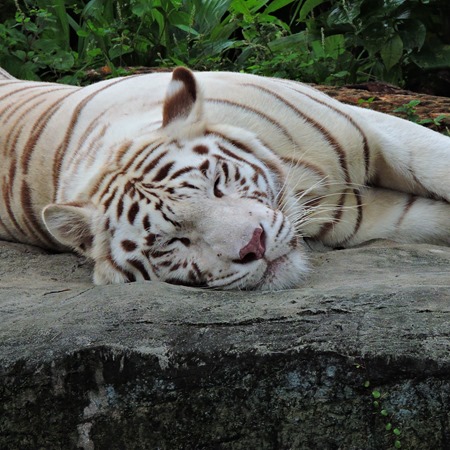 But what we did see was all worth it! The animals seemed to be well looked after and appeared very ‘at-home’ in their surroundings. We finished our trip to the Zoo, by watching their live show at 12.30 entitled ‘The Rainforest Fights Back’. It was all a bit cheesy, but good to see various animals strutting their stuff on-stage together with some audience participation. Not sure I recall any fighting by any rainforest, but the Zoo got over their point in a pretty direct way about how the Rainforests are being destroyed by mankind 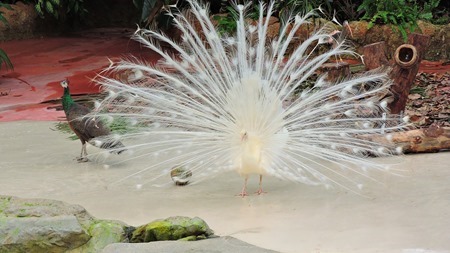 Our final stop for the day was a slight diversion by MRT (to Bayfront) and to the Gardens by the Bay. It’s a massive, newish area of reclaimed land, and Singapore had done a great job in creating some very clever and unique garden areas. We had time left over after the Zoo, so it was worth the trip. We’re going to look round it in more detail tomorrow and I’ll report back then. 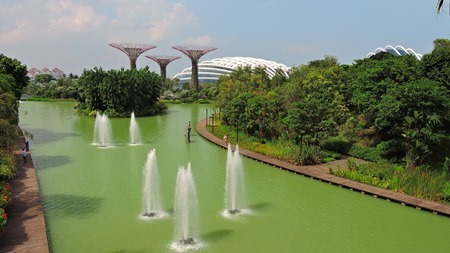 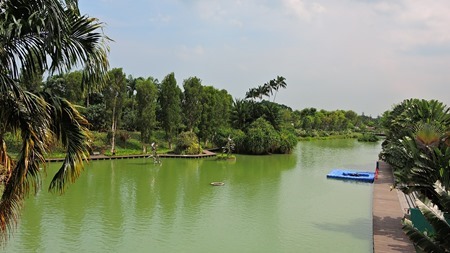 By now, the weather was turning grey, as if  a thunderstorm was due. So, we grabbed a few Chinese nibbles at Peach Gardens, a local restaurant, before taking a Cab back to the hotel. The rain never did come, but I think we had the best of the weather in the morning (so often the case out here). Well, that’s it for today Reader, tomorrow, in addition to the Gardens, we’re ‘going posh’ and taking a trip to the Goodwood Park Hotel for Afternoon Tea!

Photo Gallery so far is HERE