Today, we’re doing what every tourist does in Iceland – heading towards The Golden Circle.

It’s the area north-east/south-east of Reykjavik and promises to take in some grand sights including: Geysers, Waterfalls and a National Park. It’s a mammoth area to cover and so we’re going to pace ourselves and split the trail into two halves. It’s also a massive tourist attraction and so we expect everywhere to be heaving!

We left around 11ish accompanied by dry and crisp weather. As usual the roads were pretty much deserted once we got out of Reykjavik – Nice! 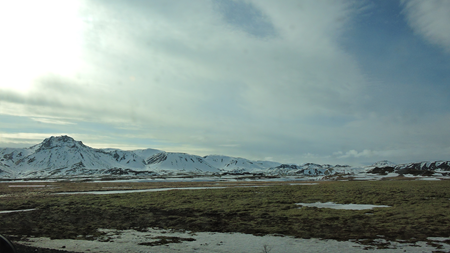 Heading for the Golden Circle

Around halfway there, we saw a pulling-in point with a stunning view. Once we’d parked the car and read the information board, we realised that we’d picked the area that had ‘the only view in Iceland of ALL its volcanoes’.

Best view of ALL the Volcanoes. Click on the pic for a larger view

Back on the trail, just after 12.30 we arrived at our first stop: the volcanic crater – Kerio. Half of Iceland was already ahead of us based on the number of coaches and how full the car-park was! Still, the queue was short and having paid our admission fee (400Kr each), we were soon making the short climb around the circumference of the beast! I’ve used the word ‘Wow’ a lot during our Iceland visit but…

To give you a sense of size, it took us around 30 minutes to walk round it – but it was worth every square inch – and yes, that’s mostly ice in the bottom.

And if walking around the top wasn’t a unique experience, we then headed down to the frozen water for the view from the bottom.

Another very pleasant assault on the senses! And maybe bizarrely, when we were at the bottom, you couldn’t hear a thing – no talking, no birdsong, no nothing! The crater was acting as a giant sound-barrier to everything ‘outside’. A very eerie sensation!

After all that, a pitstop was in order, so we drove to the next part of the Trail: the Geysir Hot Springs in err, Geysir. First stop though, a brief pitstop. Whilst Ann, Karen and Ralph tucked into some very tasty cake, I ‘slummed it’ with some almost fat-free yoghurt drink – that tasted surprisingly good! 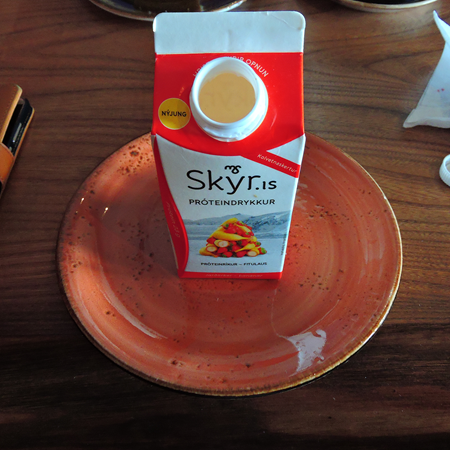 Then we were ready to take on the geysers! (having exhausted every permutation of geyser adjective on the short walk to their location: ‘dodgy’, ‘diamond’, ‘top’ etc). This was another area that was busy. In short there were a series of geysers, some small, some large, some quiet, some active. The only thing that outnumbered the people there were the number of phones being used to film the geysers! Some people had three phones – and one person was controlling a drone! The challenge was to try and guess the moment when the various geysers were about to erupt. 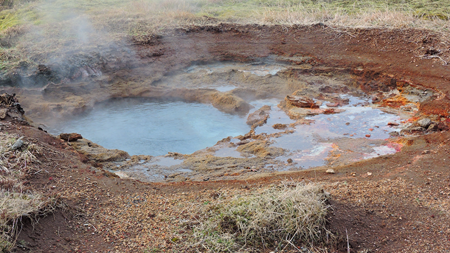 The one that seemed to getting most attention was named Strokkur, mainly because of its regularity in erupting. 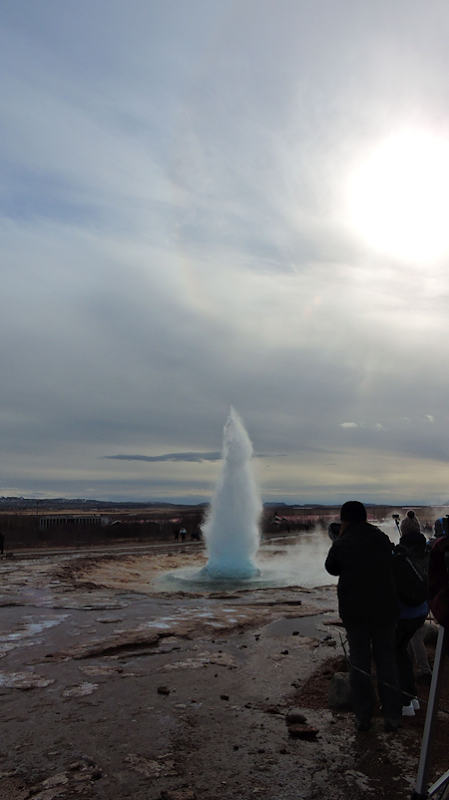 Strokkur doing its thing!
There must have been a hundred-or-so people standing, waiting for its eruption. Although I managed to bag a picture, it was soooooo cold, I wimped out and Ann and I headed for the warmth of the Gift Shop (whilst Ralph captured some more dramatic shots). 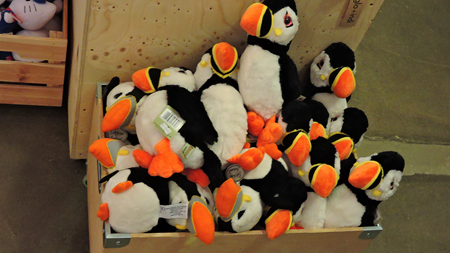 Puffins in their Natural Habitat – the Gift Shop!

Whoosh! We’re not sure where the time went today, but it was now 3.30 and that was it for Part 1 of our Golden Circle expedition. All we needed to do now was find somewhere for our evening meal. Ann came up trumps again with a suggestion – and we headed for the Icelandic Fish and Chips (link not working January 2020) near our Hotel. We arrived just before 5 and headed inside.

We were soon seated and checking-out the menu and the Specials’ board. I opted for the Pollock on a Salad Bed with Fried Potatoes. An hour-or-so later, we eaten well (again!). Another fab meal! and the cheapest to-date!

We then took the short drive back to the Hotel where we settled in the Lounge for the next couple of hours catching up with our  blogs/books/magazines.