We dropped Biscuit off at Val’s yesterday, leaving us all set for a early(ish) departure from ours. We left just after 7.15 and looking at the volume of traffic on the A14 & M6, we were soon reminded of the ‘joys’ of the daily commute! Next stop was Birmingham Airport and a date with a chocolate muffin!

We’re boarding at 11.00am, and hopefully, unlike our snow-bound experience last time we were here, we should be away up, up and away without any fuss. 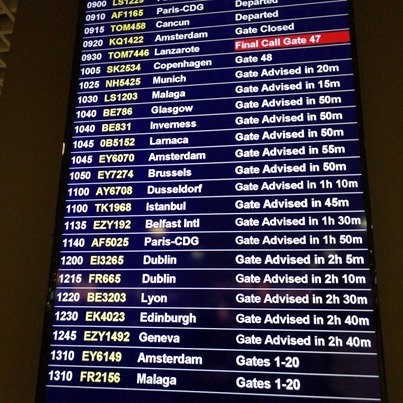 Thoughtfully, to make us feel at home, Turkish Airlines had laid on a queue for the Departure Lounge! We later discovered that this was down to a passenger attempting to carry on a bag for someone else! I mean, really, is there anyone left on the planet that thinks that’s an OK thing to do!?!?!

Luckily, through a combination of hand-gestures and a Translator, things were soon resolved – even though the bag was easily twice the size permitted! First impressions of Turkish Airlines? Our plane was 25 minutes late taking off, but the service on-board and the quality of the lunch more than made up for that. They even had a comprehensive multimedia system in the seat-backs – and that was in Economy Class! 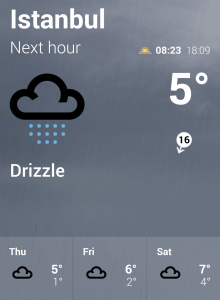 Looking ahead, it’s not the best week – weather-wise – to be heading for Turkey, but a deal’s a deal (and a good one too) so it would have been rude not to! …and I know we’ll make the most of it!  So, a new country and an untried Airline where our ultimate destination will be the Ottoman Imperial Hotel in the old part of Istanbul…

It was a good flight and the Pilot even made up for the late take-off. Immigration at Istanbul was a different story however – gazillions of people were queuing to get through, and although the queue was moving (mostly), it still took us an hour to get through!

Once we were in the Arrivals area, all we had to do was spot our name on a placard. There were only about 100 to choose from, but we soon spotted it, and were escorted out of the Terminal building by the ‘Taxi-Meister’ into the busy, busy (busy) Taxi area. Once on-board our transport, it was a trouble-free journey to the hotel and a VERY warm welcome by the staff.

It’s an ‘olde-worlde’ type establishment but it has all the essentials – including blisteringly fast Internet and a coffee machine (what else do we need?) Thinking about our stay, if the weather turns out to be as predicted, over our next three full-days here we’ll make the most of Turkey on the inside – Museums and stuff like that. We can soak up the Sun and hunt for the infamous ‘Twizzlers’ on a future occasion.