Today’s adventure was visiting Cádiz by Train. We’re scheduled on the 9.47 from Seville that gets us to our destination by 11.26 – all for the measly sum of £24 each return (not bad for the distance travelled!). It’s our last day here today, before we head back to Málaga and our second hotel… for our 6th Anniversary! 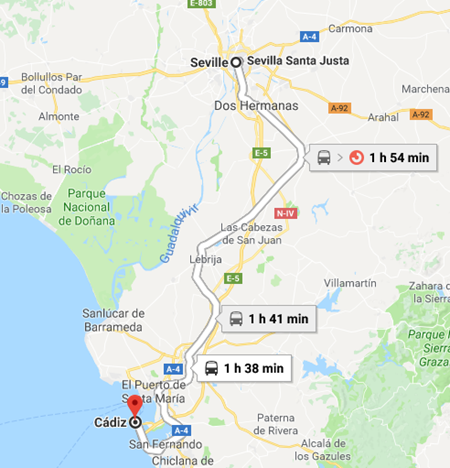 After an earlier breakfast than yesterday (carefully avoiding a repeat of yesterday’s shutter incident), we grabbed a cab right outside the Hotel and headed for the Station. Our driver, sensing the heavy traffic, took us there by a combination of main roads and mostly cobbled side streets, meaning that the hair-raising 25-minute journey amplified every rattle in his vehicle (and our bones too!)
Not surprisingly, we were at the Station with plenty of time to spare. Our Train was scheduled for 09.45 and we took the slow walk to our platform. 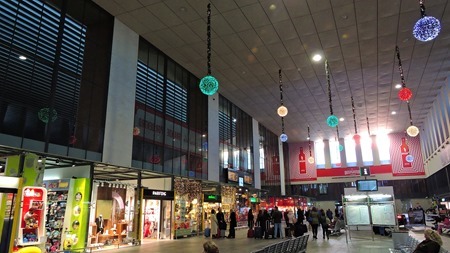 Clearly, the Trains out here don’t enjoy the same split-second punctuality as say, Germany or Switzerland, as 9.45 came and went. Eventually, 10 minutes later, our transport arrived, and we were soon on-board in our allocated seats for the 90-minute journey south.
OK, the Train may have been late, but this was more than made up for in the smoothness of the journey – no ‘diddley-dum’ every so often accentuating the joins in the track – this was pure ‘diddle’ all the way there, sometimes diddling up to 175kph! Smoother than a smoothie on its way to Smoothville. Additionally, the seats were super-comfy and they also reclined – there was even two charging points per pair of seats too!
Quite a few stops though…

We eventually arrived in Cádiz just before 11.45 and immediately headed for main drag. As we began our trek, we could see that we were pretty close to the Port and there were two Cruise Ships in dock – The German AIDABlu and the familiar British P&O Ventura. As a result, the town (well, certainly the first mile-or-so) was a lot busier than it would be normally, but we dodged the crowds and headed for the planned picturesque walk past the Catedral de Cádiz and then along the sea-front. 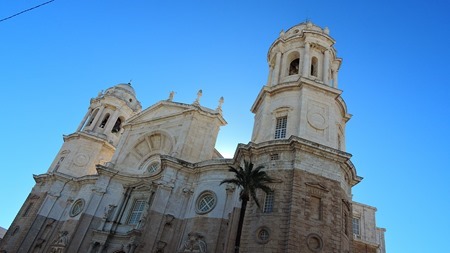 Weather-wise, it was up to 14-15 degrees C by now – but as long as you stayed away from the side streets! There, the temperature seemed to plummet, and we were wise to pack coats and scarves!
We wandered along the sea-front soaking up the Sun and admiring how blue the sea and sky were… 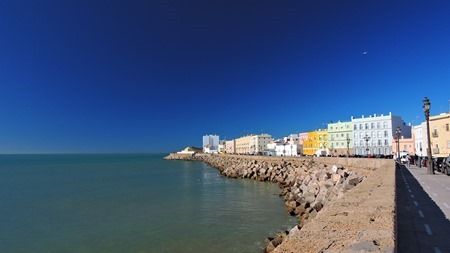 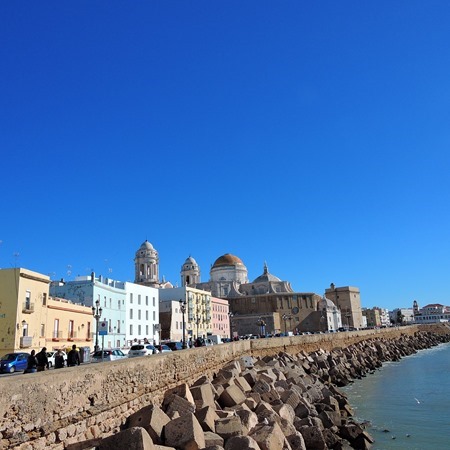 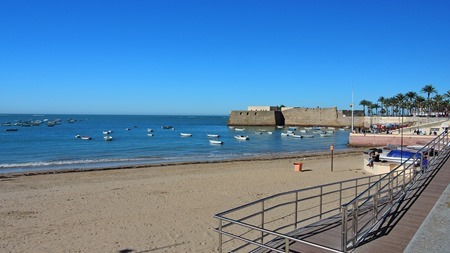 …and in the distance, we could see the Castillo de San Sebastián Fort… 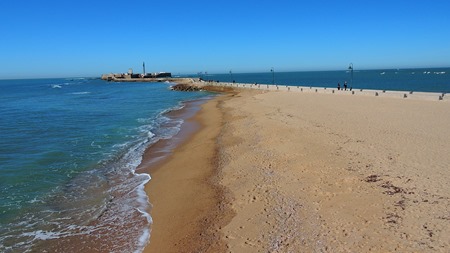 …and thought that must be worth a closer look… 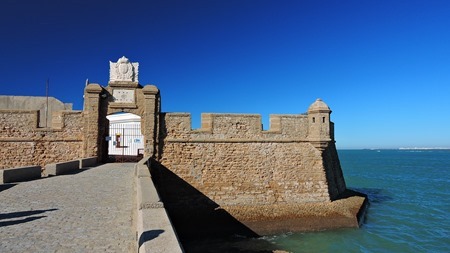 …but this was about as close as we got, as it was closed for major restoration work

We then hit the backstreets looking for somewhere to eat. We soon discovered El Serrallo. It was pretty busy and full of locals (so that suited us perfectly). It was more ‘greasy spoon’ than Michelin Star, but the service was swift and the food delicious! To make things more authentic, on the table next to us was a party of Spanish Señor Citizens (see what I did there!?) practising who could shout the loudest – we weren’t sure whether they were just deaf, drunk, or both – but it certainly gave the place some atmosphere! 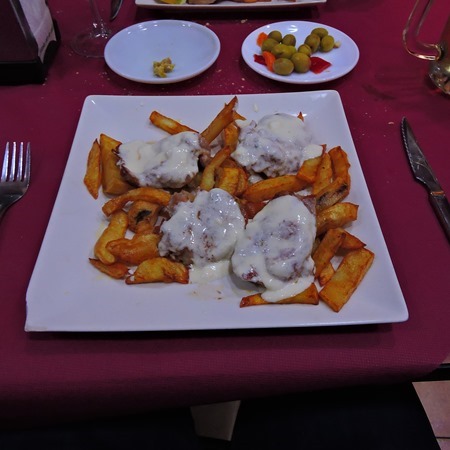 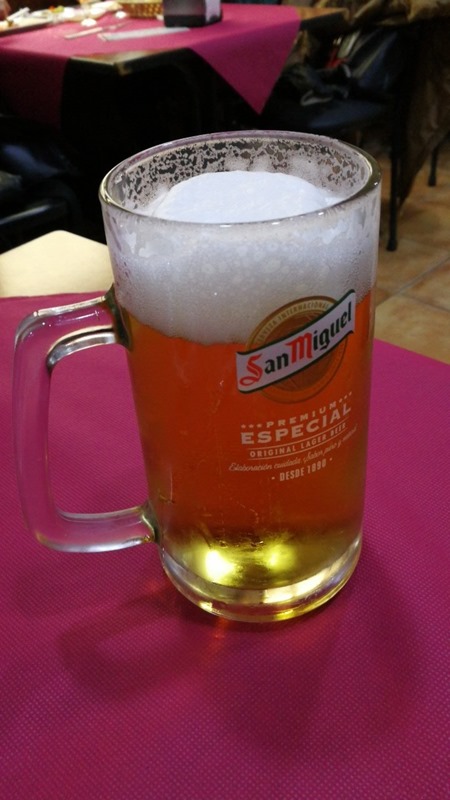 Lunch with Atmosphere!
Then it was back to the walking as we carried out exploring the back-streets… 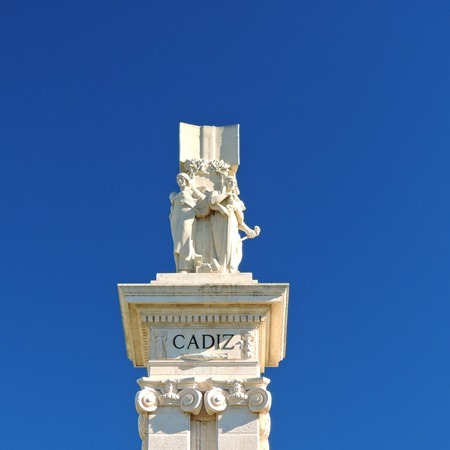 …and then out into the sunshine for one last time… 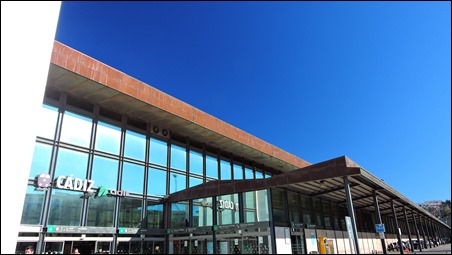 …before heading back to the Station to catch the 15.40 back to Seville. 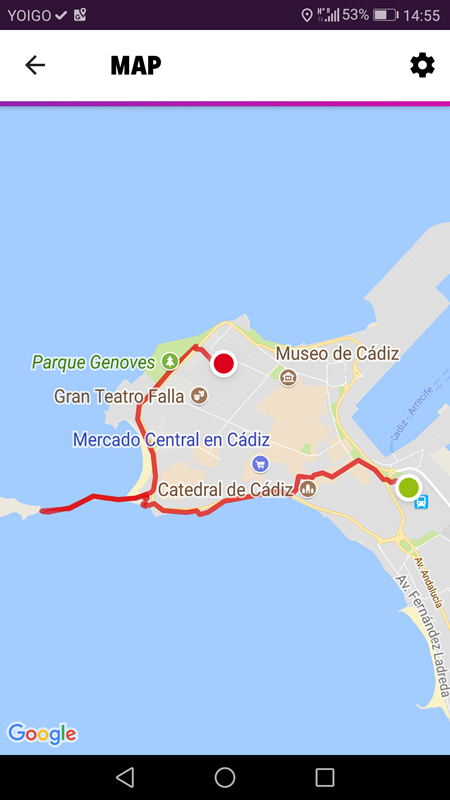 Another Netflix binge-watch tonight as we watched episodes 3 and 4 of series 2 of The Crown. We check-out tomorrow and head for Córdoba and to Malaga for our second hotel, and the rest of our holiday – the Barcelo Malaga.