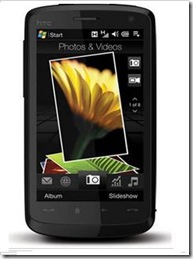 If you’re a bit nerdy like me AND you like the latest in mobile phones AND the current iPhone 3GS isn’t quite powerful enough for you, then read on…

The ‘net seems to be falling over itself to report on the new flagship PDA/phone by HTC codenamed ‘Leo’ , (to be renamed the ‘HTC HD2’), due apparently, in October 2009.

Almost 3 times as a powerful as the iPhone; with the largest screen ever seen –  4.3 inches; the new Qualcomm ‘snapdragon 1Ghz processor and the new Windows Mobile 6.5 operating system, we nerds are positively salivating at the thought of this beastie!!!

Better news still if you are on O2 (like me) where the latest buzz is that it’ll be free if you are on a business tariff at around 45 notes a month.

I can’t help thinking that with O2’s exclusive deal with Apple to be the sole provider of the iPhone 3GS coming to an end soon (Orange and Vodafone will be selling them in the future), the HD2, will be the must-have high-end phone of 2010.

wmexperts Podcast Episode 70
WM Experts
Malatesta and Phil talk up Microsoft’s Project Pink, the deluge of HTC HD2 news and the latest in Windows Mobile. Plus, more of your e-mails and a couple of …
See all stories on this topic

HTC Leo Snapdragon Processor: 300-percent faster than Touch HD
Phones Review
The Snapdragon toting HTC Leo is looking more and more interesting now that several benchmarks have been announced, benchmarks that could well mean the HTC …
See all stories on this topic

HTC Rumour: Passion with Android 2.0, Leo’s Snapdragon Processor
Product Reviews (blog)
As we know, Windows Mobile runs the HTC Leo; this has lead to rumours that Google Android 2.0 would power the HTC Passion. According to Android and Me, …
See all stories on this topic

O2 on iPhone Exclusivity: We’re Proud to Have Had It
Softpedia
Besides the aforementioned Palm Pre, O2 is also rumoured to plan on nabbing the high-end HTC Leo, a Windows Mobile-based device that sports Qualcomm’s …
See all stories on this topic

Digital Compass in HTC Leo confirmed again – actually comes with a …
By admin
The latest HTC Leo leaked ROMs however contain an application which makes it very clear the device is in fact equipped with the hardware, and unlike Apple’s version the device will actually come with a useful application out of the box. …
WMPoweruser.com – http://wmpoweruser.com/

HTC Leo Snapdragon Processor: 300-percent faster than 300 percent …
By trakkrz-admin
The HTC Leo packs a Snapdragon 1GHz processor which ups the game in smartphone performance as benchmarks show that the HTC Leo is over 300% faster than the HTC Touch HD and on all 3D grap[…] read full article. Tags: htc, Mobile Phones
Gadgets – https://web.archive.org/web/20120129042316/http://gadgets.trakkrz.com:80/

HTC Leo benchmarked, leaves blisters
Sep 27, 2009 … The HTC Leo has already got hearts-aflutter the world over with its high-end spec sheet and huge capacitive touchscreen, but now that some

HTC Leo could be called HD2, oh and there’s a video of the UI …
Sep 26, 2009 … The HTC Leo has been churning in the rumour mill for quite a while but it’s all coming to an end – it’s launching in October.