The Stratford Players desperately need King Lear to be a success or it will be their last ever production, and their theatre will be demolished for redevelopment. Maybe a big box office star can help? Enter from stage-left, one Jefferson Steele: Hollywood action hero, currently between his film-franchises and encouraged to play his very first Shakespeare role – live, and on stage. Unfortunately, his Agent, unable to find him work in the States, has allowed him to believe he is coming to THE Stratford and the RSC…

By now you’ve realised that we’re not talking real-world – instead, it’s the latest production by Second Thoughts penned by Private Eye’s Ian Hislop & Nick Newman comedy of mis-understanding, mayhem and men in tights! 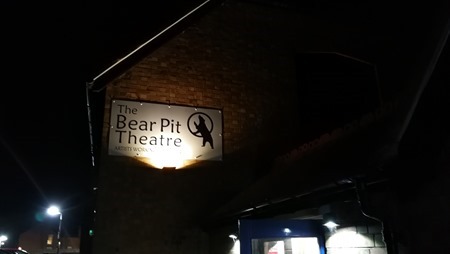 Just after 7.30, the curtain went up at the Bear Pit on what turned out to be (for us) probably Second Thoughts best production to date. Everyone acted their socks off – and the lead, Pete Cubitt (who we’ve not seen here before) was totally convincing in the lead-role. To say he ‘owned the part’ was an understatement!

Clearly, the cast were enjoying it too, and that was reflected in the audience’s regular appreciation throughout the performance. The run is on until Saturday having started on Wednesday – and there’s a matinee performance on the last day too. At just under two-and-a-half hours (plus the interval), it certainly didn’t feel ‘long’ as the time passed very quickly (surely a good sign!) The only ‘bit’ I didn’t quite get was the short ‘Fool’s Songs’ at the end of many of the scenes, but technically speaking, I could see that something was needed whilst a change of scenery was needed.

Thanks Second Thoughts, we had a great time, and it was good to run into Rick, Ann and Mags too!

It was a good visit to Stratford for us too on the retail-therapy front. I managed to pick up an extra pair of shoes for our next holiday, Ann bought a few tops – and we finished it all off with a rather splendid nibble at Fourteas, a 1940s themed tea-room in Sheep Street.

The journey home was full of road diversions, and as a result, it took us just over an hour-and-a-half!