Tonight was the annual Christmas get-together of ‘The 5ive’ – the group of us ex-self employed Trainers who all worked together on the BA project back in 1999! We’ve managed to keep up these get-togethers for over 15 years now – and we haven’t changed a bit! We weren’t up to full strength tonight in terms of numbers – with Angela, Carey and Antoinette to keep me company, whilst Philip and June were elsewhere. We tried face-timing Philip, but the mobile signal was pretty poor so we reverted to a text instead!

After a quick drive to Bedford and then the Tube to Euston Square followed by a fifteen-minute walk, I ended up at tonight’s restaurant of choice – Côte Brasserie in Charlotte Street but before all that, Angela and I settled down at Cafe Nero opposite for a spot of techy troubleshooting with her Laptop, Tablet and Camera. After put two-hours of successful ‘teching’, at around 6.25 we wandered across the road into the toasty-warm (and very busy) restaurant. We were shown to our Table where Antoinette and Carey had just arrived. Menus were soon being perused and we quickly made up our minds. They seated us upstairs (it was packed downstairs), which initially was deserted and lacked a bit of atmosphere, but a little later, another party of four were seated on the opposite side to us which helped make the place feel more welcoming. 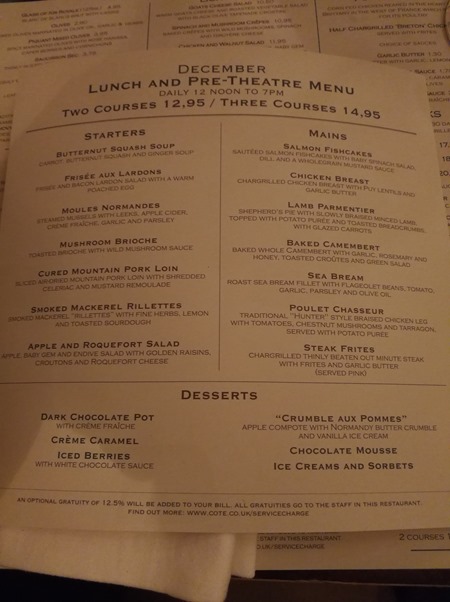 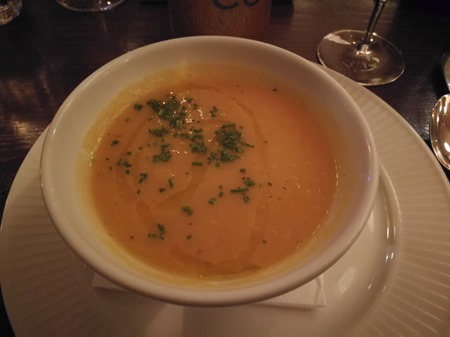 The food was tasty but the service was a bit mediocre. The language barrier between us and our Waiter also presented a few challenges along the way. Our evening ended after coffee and we headed our separate ways – the girls to Tottenham Court Road Tube and me back towards Euston Square. By now, it was getting really cold, and on my short walk back to the Tube, I felt a light dusting of snowy-rain to encourage my walking pace! It was great see the girls again, and as usual, we’d put the world right – and had a few laughs along the way. My connections were good – a Tube train almost immediately and just a five minute wait for my Train at St Pancras. By 10pm I was back at Bedford and by 11, I was under the duvet! Great days with great friends!