Well, it wasn’t quite all of the them (see the photo below) and luckily, we didn’t have to go to ‘the top of the hill’ to see them. 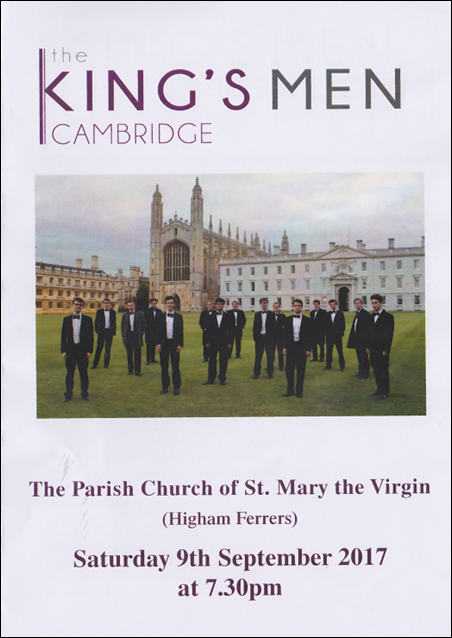 What we did see (and hear) was 7 (of the 15) guys who are Choral Scholars from the Choir of King’s College, Cambridge, performing in a close-harmony group, as part of their annual Tour. And, in short, they were just fantastic! As a bonus, if they ever decide to give up singing, their future as Raconteurs is also assured as they had us in stitches between the songs.

The Church was packed, and although the ticket sales were driven (slightly unusually) by Coleman’s the Stationers, it was a sell-out! 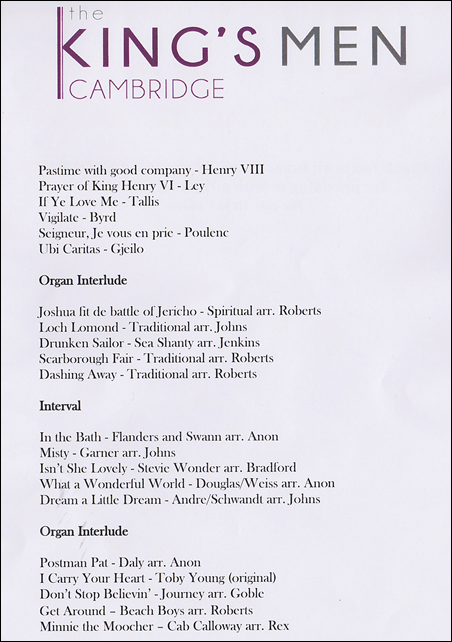 As you can see, it was a varied programme (our fave being Part 1), where they performed a very wide range of tunes – ‘Prayer of King Henry VI’ through to ‘Postman Pat’ by way of ‘In the Bath’! There was also some limited audience participation for the final track – ‘Minnie the Moocher’ (where I think some of the congregation got a bit carried away).

The Organ Interludes was just as spectacular with one of the ‘Men’ playing as if his life depended on it (and it may well have done, as we learned it was to be his final performance with the ‘Men’). He really made the organ come alive!

For many there, tonight was probably the best fun you can have on a Saturday night – and keep your clothes on! (well, maybe!?)

The Church had also laid-on some quality nibbles during the interval too! It all finished just before 10, and as David and Valerie were good enough to act as chauffeurs, we were soon home.